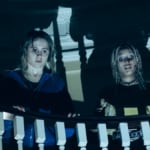 In “Bodies Bodies Bodies,” a dysfunctional group of rich kids who have long outgrown each other hole up in one of their parents’ mansions during a hurricane. When they’ve had enough of getting crossed and making TikToks, they turn to an old pastime: a Mafia-like game called “Bodies Bodies Bodies” that always ends in tears and hurt feelings. This time, though, the stakes aren’t just emotional: after the power cuts out, actual bodies begin to drop. Inside one of these chronically-online narcissists lurks a killer – who could it be?

If that synopsis makes the film seem difficult to categorize, it’s by design. “When [writer Sarah DeLappe] and I started to work together, we both felt that the biggest mistake you can make with a group film – and especially the slasher, or whatever genre you want to call this – is to have all the cliches,” director Halina Reijn said in an interview with TheWrap. “Of course, we wanted it to be genuine and interesting, sexy and strange and dark.”

Beyond the bloody scares that are part and parcel of any horror film, Reijn was most interested in her characters’ dark inner lives, giving them the capacity to do horrible things. “I’m way more interested in the demon inside of us than the demon outside of [us],” she added.

During the creative process, Reijn drew inspiration from the “language-heavy” plays of Shakespeare and Chekhov, along with a medley of other films.

With “Bodies Bodies Bodies,” “we wanted to make our own modern version of ‘Clue,’” Reijn said. The delightfully campy ’80s film based on the board game of the same name is equal parts black comedy and whodunit. Six strangers are drawn to a secluded New England mansion by a shadowy man who knows their worst secrets. Each guest gets a weapon and a nickname: Colonel Mustard, Mrs. White, Mrs. Peacock, Mr. Green, Professor Plum and Miss Scarlet, naturally. But when the blackmailer turns up dead, it appears there’s a murderer among them. They must figure out who it is before they become victims themselves.

The cult classic lives on in the outsized, panic-stricken characters in “Bodies Bodies Bodies,” but even more so in its construction. “On a technical level, [“Bodies Bodies Bodies”] is a puzzle,” Reijn said. However, “Clue” had three different endings, a gimmick that “Bodies” wisely avoids.

“Heathers” is the blueprint when it comes to pitch-black, razor sharp, privileged mean girl satire. In the film that helped propel her to stardom, Winona Ryder plays the savvy Veronica Sawyer, who teams up with a psychopathic bad boy (Christian Slater) to take down her high school’s ruling clique from her. The film mines much of its humor from the characters’ ignorance and vanity, especially in contrast with Veronica, making her a surrogate for the audience.

Her “Bodies” counterpart is Bee (Maria Bakalova), a young immigrant woman who sticks out like a sore thumb among her new girlfriend Sophie’s (Amandla Stenberg) wealthy friends. More of an outsider than Veronica ever was, her introverted personality and her working class background throw the others’ into even sharper relief.

In the same vein, Reijn cites “The Social Network” as an inspiration – particularly, the acerbic opening scene in which Erica (Rooney Mara) and Mark Zuckerberg (Jesse Eisenberg) argue at a local bar. “They speak on so many levels,” Reijn said of Aaron Sorkin’s Oscar-winning dialogue. “And that’s what all these young people do a lot.”

There’s something particularly American (and Sorkin-esque) about the breathless pace at which the characters rattle off insults, both veiled and direct. In “Bodies,” Bee – who is neither American nor a native English speaker – can’t keep up. Reijn underlined her outsider status by giving her a cheaper, older cell phone. “Ella She’s the metaphor for that feeling, my personal feeling, of being an alien and thinking that you do not really belong,” Reijn added.

Directed by David Fincher, “The Social Network” chronicles the origins of Facebook, from its inception in a Harvard dorm to its explosive success, and what Zuckerberg lost in the process. A Shakespearean tale of greed and betrayal, the film is widely considered to be Sorkin’s best of it.

Larry Clark and Harmony Korine’s portrait of ’90s youth culture was another muse. The coming-of-age film stars Leo Fitzpatrick, Chloe Sevigny, Justin Pierce and Rosario Dawson in their acting debuts as a ragtag group of teens bumming around New York City. Taking place over the course of a single day, the teens engage in sex, drugs, drinking and casual crime. “Bodies” doesn’t share much with “Kids” in terms of tone or structure, but both of them are interested in the way young people communicate and entertain themselves.

Leonardo DiCaprio, Tobey Maguire and Kevin Connolly star in this infamous independent film about a group of twenty-somethings who hang out at a diner called “Don’s Plum.” The loosely-structured drama captures a single night in which the friends and their female companions talk, fight and make up. It was mostly improvised and shot on a low budget over the course of a few days in 1996.

The most interesting thing about “Don’s Plum” is that it has been banned in the United States and Canada for more than two decades. After DiCaprio blew up in the mid-’90s, he along with Maguire and other young male stars were deemed the “Pussy Posse” for their hedonistic lifestyle. In 1998, producer David Stuntman sued DiCaprio and Maguire for suppressing the film’s release because they worried it would “reveal personal experiences or tendencies.” They settled, and “Don’s Plum” was briefly made available in Germany in 2001. Since then, writer-producer Dale Wheatley launched the website “Free Don’s Plum,” where he fields requests for links to the film.

“I recommend everybody watch [“Don’s Plum”],” Reijn said. “It is a wonderful film, and it is so genuine and so authentic and so beautiful. That was a huge inspiration for me. I also used that when I talked to A24 [about ‘Bodies Bodies Bodies’].”

Reijn recommended that all her actors watch the works of the iconic French actress Isabelle Huppert in preparation for “Bodies.” “I would always wear a T-shirt with her name on it just to make them aware,” she recalled.

Huppert has nearly 150 credits to his name. Some of her most celebrated work by her includes “The Piano Teacher,” “The Lacemaker,” “Violette Nozière,” “La Séparation,” “8 Women” and “Elle,” for which she received an Academy Award nomination.

“I think it’s really interesting sometimes to be like Isabelle Huppert, who just says, ‘I go to zero,’” Reijn continued. “Instead of thinking, ‘Who am I? Where am I going?’ just react. Just say your lines and react to the other one. Especially nowadays, where we all grew up in front of a camera, it’s kind of interesting to think that it’s not about you, but about the other. And so I think Isabelle Huppert is the master of that. Not ego.”

A Woman Under the Influence (1974) – and all Cassevetes films

The group dynamics in “Bodies” take their cue from the films of John Cassavetes. Reijn specifically drew from the spaghetti scene in “A Woman Under the Influence,” the 1974 film starring Gena Rowlands and Peter Falk. In the scene, Mabel (Rowlands) tries to hide her escalating mental illness from her husband Nick (Falk) and his working class friends from him during a pasta dinner.

In the films of the iconoclastic writer-director, group scenes “always flow,” Reijn explained to her cast.

She also took notes on his approach to collaboration: “Cassavetes wrote down the scripts, but he also gave [his actors] space to be free and bring their own input.”

Cassavetes and other inspirations aside, it’s all about making something new at the end of the day. “Always really try to make your own film,” Reijn advised. “Let all of it go. Whatever this is, this should be a unique little work of art itself.”