After 17 years of struggle, Zapotec communities in Oaxaca receive community concessions for the free use of water 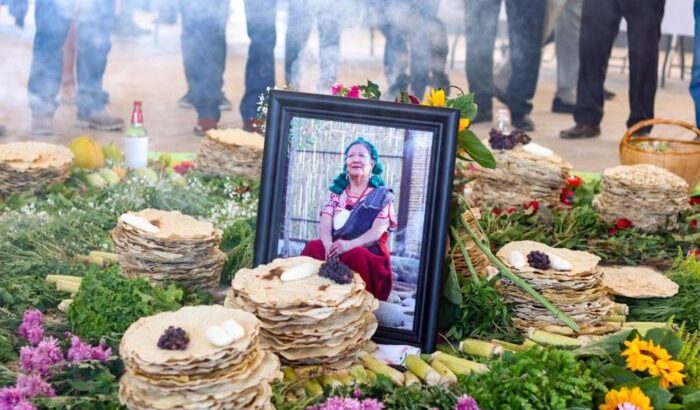 Oaxaca, Oax.- As a historical fact and after 17 years of struggle, 16 Ben’za (Zapotec) communities from the Valley of Oaxaca received their titles of “Indigenous Community Water Concession” that allows them free use on their plots.

“Yes, it was possible”, “This fight belongs to everyone”, “Thanks Carmen Santiago, she died wishing for this moment”, expressed the peasants of the indigenous communities, who recalled the intense moments they lived to obtain this recognition to water their vegetables and flowers.

The indigenous ritual with the photograph of the social fighter Carmen Santiago did not miss this important event, where she was remembered as a person that always privileged community and mutual help focused on respect for mother earth.

The delivery ceremony was held in Santa Ana Zegache in the central valleys of Oaxaca, where officials from the National Water Commission (Conagua) were present, as well as representatives of Human Rights from the local to the international, such as the representative in Mexico of the office of the UN High Commissioner for Human Rights, Jesús Peña.

Peasants dressed in their traditional attire and the smile ahead as a sign of triumph, they recalled that to achieve this moment they had to carry out a series of steps, among them, the indigenous consultation, which for the first time was carried out around the granting of concessions.

In this struggle the peasants also achieved the signing of a new Presidential Decree to put an end to the ban that prevented free access to water for agricultural use, which was a violation of their human rights and territory.

In addition, they agreed that the 5th stage of the Consultation will continue until they have signed a collaboration agreement with Conagua, and they will work on the content of the document in the coming days. 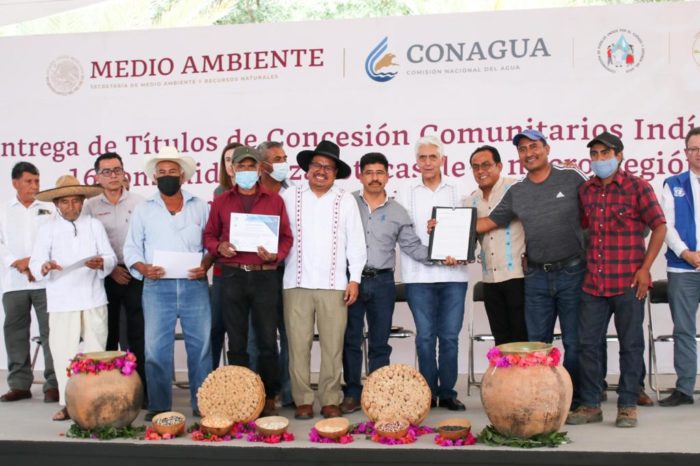 For this struggle, the peasants created the Coordinator of Peoples in Defense of Water (Copuda) and also received direct advice from the Human Rights Center Flor y Canto.

“With that presidential decree and the only one of its kind at the national level, he recognized the autonomy and free determination that the communities have to manage their water, also accepting that, over time, that we, the peasants, have worked in the preservation and care of their water resources”, stated Ernesto Martínez Santiago, president of the Coordination of Peoples in Defense of Water (Copuda).

Beatriz Salinas Avilés, from the Flor y Canto Human Rights Center, stressed that this fight belongs to each and every one of the communities, which never gave in, she said, they were always firm and loyal fighting for their concessions.

“The 16 communities and Conagua will continue to work together to improve their agricultural life, their community life and their environment as they have always done collaboratively and in favor of the land and the environment,” he stressed.

They also agreed to accompany the assemblies of the 16 communities to present the concessions, and that a process of raising awareness with the authorities regarding the indigenous community water concessions will be carried out, since there is no legal framework for it.

See also  The Binding Of Isaac: Repentance Brings The Local Coop And More To PC Today

In addition to local authorities, the General Coordinator of Indigenous Rights of the National Institute of Indigenous Peoples, Hugo Aguilar Ortiz, also attended this award ceremony; the Director and representative of Copuda, Ernesto Martínez Santiago and Juan Justino Martínez, respectively; the Director of the South Pacific Basin Organization, Miguel Ángel Martínez Cordero; the Center for Indigenous Rights Flor y Canto AC, the General Director of the Institute of Indigenous Peoples, Adelfo Regino Montes; the Director of the Ombudsman for Human Rights of the People of Oaxaca, Bernardo Rodríguez Alamilla; the Representative in Mexico of the office of the UN High Commissioner for Human Rights, Guillermo Fernández-Maldonado Castro; the General Director of Conagua, Germán Arturo Martínez Santoyo and the Secretary of the Environment and Natural Resources, María Luisa Albores González.