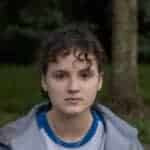 For as many great character interactions as there are on “Paper Girls,” there is sadly no overlap between Ali Wong and Jason Matnzoukas. Which is odd because, as it turns out, their friendship is the reason both of them even starred in the show.

When the series, based on the comics of the same name by Brian K. Vaughn, was first announced by Prime Video, neither actor was immediately gunning for a role in it. They were both getting through the pandemic at home, when Mantzoukas sent the book to Wong just as a reading recommendation.

Wong was immediately drawn to the idea of ​​playing adult Erin, and Mantzoukas encouraged her to audition. But it wasn’t until Wong suggested to Mantzoukas herself that he auditioned to be the Grandfather that he thought of it.

“I think he was almost offended, because he was like, ‘Grandfather is so old!’” Wong joked with TheWrap.

And indeed, Mantzoukas told TheWrap himself that the idea of ​​so easily fitting the role of someone called Grandfather was “deeply unsettling.” But nonetheless, I have loved the series and pursued it. So, thanks to each other, Ali Wong and Jason Mantzoukas signed on as Adult Erin and the Grandfather respectively. And according to Wong, it only strengthened their already tight relationship.

“He’s really, he’s like an A+ human being,” she said. “And it’s been so nice to bond over being part of the show together.”

You can check out TheWrap’s full conversation with Ali Wong below.

Note: This interview has been lightly edited for clarity and length.

Ali, I want to start with just, kind of condolences. I’m so sorry that you met your doom in a giant robot. But as TV deaths go, it’s a very cool way to die. So tell me how you felt about that being the way that your character was gonna go?

Yeah, that’s not how it was in the book, so I was shocked. And I was really excited about it. I mean, I’ve obviously never done anything like this. I don’t — yeah, I can’t recall ever working in the sci-fi genre. So all of it was very new to me. Like, I’ve never run in the dark before this show. And let me tell you, it’s terrifying! I mean, like running in the robot’s head, and operating all that stuff, wearing that glove was really freaking cool. And I mean, this whole show has been many firsts for me. I don’t know if you know the story of how it came to be, but basically Jason Mantzoukas and I are very, very close friends. And we had always sort of dreamt of like, fantasized about playing Alana and Marco in another one of Brian K Vaughan series “Saga,” which, are you a fan of that comic book series? 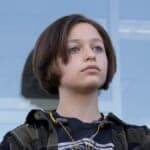 Yeah, that one’s fantastic. But then I mean, one, I know that Brian K. Vaughan never wants to make that into a series or that’s the intention. And then we are also too old to play those characters. And during quarantine, Jason was very sweet and he had sent me a huge box of comics. Some of his favorite comics of him.

And one of them, I have felt the entire series of “Paper Girls.” And I blew through it in maybe, I don’t know, a day or less? I had never read anything like it. I mean it centers, essentially, around a young Asian-American girl. And I had heard of “Paper Girls,” I had never read it. And I was so drawn to it right away. Then after I read it, and I had seen adult Erin in there, I thought to myself, I said to Jason “Huh. Did you say that they’re making this into a series? I think I’d be kinda interested in playing adult Erin.”

And he was like, “Oh, you should totally do it. I think you would be great.” He really encouraged me to reach out and I did. And then the producers asked me to read for it, and [Jason] was like, “You know, it’s understandable that they probably don’t automatically see you in this role. Because adult Erin is someone whose dreams didn’t come true. And you, Ali Wong, are someone whose dreams all came true.”

But that’s why it’s acting!

Right. And so then I thought about it and, for a long time my dreams did not come true. So I absolutely do remember and, you know, I’ve only been famous for like six years. But for a lot of my — I would say now, the majority of what I consider to be my career, which [is] when I started stand-up comedy, has it really been like a lot of disappointment, do you know? I mean, that’s like baked into me and I definitely relate to thinking about my younger self and looking at my current state and being like, this is not what we had planned.

Well that brings me to my next question: if given the opportunity like in “Paper Girls” — where you meet your 12-year-old self — in real life, would you?

I would now! I wouldn’t have like eight years ago, but yes, I absolutely would now. I’d be like “Bitch we made it!”

“We’re good! It’s all going to be fine.” So I think like reaching that place was a really interesting journey. So basically then, you know, I had committed to saying yes to it, and the project saying yes to me, and it was all lovely. And then, throughout the process of being like, “OK, I think I’m going to do this ‘Paper Girls’ thing and play old Erin,” I said to Jason, “Do you want to do grandfather? Because they haven’t cast grandfather yet, and you look exactly like grandfather.”

Oh, I didn’t realize he wasn’t already attached when he was encouraging you to get you involved!

No, I wasn’t attached at all! and then Yo had brought up that idea. And I don’t know if I have ever thought of that! I think he was almost offended, because he was like, “Grandfather is so old!”

You know, I actually spoke to Jason, and I asked him, “How are you coping with being known as a grandfather?” And he said, “You know what, it’s deeply unsettling. I haven’t even played anyone’s dad. I went straight to grandfather.”

(laughs). But I mean, he’s fantastic. And now it’s like, I mean, could anybody else play him? No. And he’s such a — I mean, the thing that’s also lovely about us is that we’re like, huge Brian K. Vaughan fans. So it’s like a dream come true for us to be part of his universe. 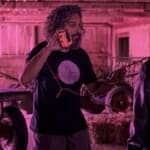 But then you didn’t even get to have any scenes together!

I know, it’s so sad. It’s so sad because yeah, we’re such good friends, and we had like, no overlap while the shoot was going on. But I mean, we talked with each other throughout and would talk about the script, and our thoughts on it, and we would share them with Chris Rogers. I mean, it was just — I’m so happy that we did this together. Neither of us would have been in this project if we weren’t friends, I don’t think, and had really encouraged each other and pushed each other to do it.

Well I do want to ask about someone you shared many scenes with, your younger self, played by Riley Lei Nelet. I’d love to know how much you guys discussed getting the mannerisms of each other down. How did you make sure to match up so that Erin was one human being?

We didn’t, at all. It’s a very odd thing, because this is my first time also primarily working with preteens and teenagers, and one of the first questions I asked the producers when I read for the role was “Do I look like the kid?” And they said “Yeah, you do.”

And it’s funny because when I look at Riley — there’s very few people, Asian-American people, who are actually like Chinese and Vietnamese. Like, there’s some people who are ethnically Chinese, but their family lived in Vietnam for a while and spoke Vietnamese, but they don’t really consider themselves Vietnamese, they consider themselves more Chinese. But Riley, like me, is Chinese and Vietnamese. And also we do sort of look alike. So yeah, I mean, it was just this kind of interesting thing when I met her where…I can’t describe it, but I think we both felt connected. I definitely felt a connection with her mother de ella right away too and there were times where we would go and eat together. It really was — they just kind of felt like family right away. And in terms of mannerisms, I mean, we didn’t study each other at all.

so that just happened onscreen?

Yeah, it just worked out really well. I do believe it’s one of those things that was just meant to be, you know? We still keep in touch too. I mean, me and her mother de ella text often and, throughout this whole process, because it’s her de ella first big thing de ella, you know, I’m happy to be there for her.

So, you touched on it a little bit in terms of fact that “Paper Girls” is about a young Asian-American Girl and growing up and what not. But was there a specific scene that really resonated for you? Because I will say, for me, it’s the tampon scene with the girls. That’s the real thing I’ve ever seen for preteen girls.

And it is! And she’s trying to get my attention when she gets her period? I’m sweet.

yeah! So was there a moment that hit hard like that for you?

I have to say, maybe when, before I die, and Riley and I are saying goodbye to each other. It’s very, very sad. I think that part had always really gotten to me, because we really go on this journey together. She’s so resentful of me, she’s so upset with me and how she turned out. And then by the end, you know, my character has grown a lot and she sees how much I’ve done my best to protect her and her friends from her. And now she’s sad to say goodbye to me, you know? There’s a way in which she feels proud of me, and then there’s a way in which I’m like, trying to encourage her and tell her like, “You still have a chance. You can still have the life you want.”

And it makes me, I think, emotionally sometimes, thinking about how few people get that chance. Being looked in the eye, by someone who they know is telling the truth, who’s being honest and telling them like, you still have a chance to be who you want to be and have the life you want. So yeah, I think that scene — like every time I read it, I rehearsed it, every time we did it, I would tear up and even now thinking about it. And just like looking at Riley who does look like me, you know? I get emotional even just thinking about it.

All eight episodes of “Paper Girls” are now streaming on Prime Video. 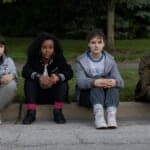