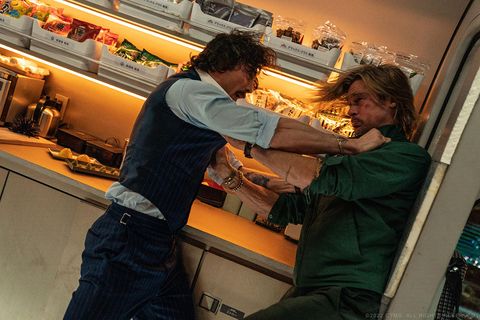 Although it is not about Marvel, it is already rare to go to the cinema and get up as soon as the credits begin. Well, perhaps with the latest winner of the Palme d’Or at Cannes, it can still be done without fear. However, with any moderately commercial Hollywood title and with the slightest chance of becoming a franchise, you have to wait a bit. ‘Bullet Train’ does have a post-credits scene, although we don’t know if we should call it that at all. At the end of the day, even if we get up from the chair as soon as the film ends, it will be rare that we have time to leave the room without it starting. However, in case someone was in a hurry and ran away, let’s review the post-credits scene of ‘Bullet Train’.

Contrary to what usually happens in other sagas, this post-credits scene is not intended to point to a future sequel or to give us a distant epilogue or to make us, at least mainly, laugh. The end of ‘Bullet Train’ shows us that the film was a puzzle, and little by little all the pieces fit together (which in this film is almost equivalent to “dying”). In the middle of the final action, before the train derails, we have seen Limón (Brian Tyree Henry) fall off the train into a lake along with a hitman.

Later, at the end of the movie, when the good guy Brad Pitt he is picked up by Sandra Bullock and they both go to who knows where after a hard day’s work, a half-dead Prince (Joey King) appears. Having died her father claims her place as the new heir to the Yakuza throne, the new White Death. However, Pitt again has good luck within the bad and this last enemy ends up run over by a fruit truck. Afterwards, Ladybug and her boss calmly leave.

It is not until this post-credits scene that these two sequences are linked. In it we see how Limón survived the fall, killed his rival and got out of the water to steal the fruit truck. Well, not just any fruit, the tangerines that served as the nickname for his deceased “twin brother”. It is he who drives in a hurry to the accident and runs over the young killer of his partner. Thus, a character gets revenge on him and the film completely closes that circle of connections that form it. It is the final bow to all the plots of ‘Bullet Train’.

Thus, the White Death leaves a power vacuum that, possibly, the Ancient One can occupy after his revenge. Thus, the character of Pitt is free from any persecutor or anyone who seeks revenge, thus, the character of Aaron Taylor-Johnson is avenged by his brother. Thus, a film is closed in which, in addition to the character of Brad Pitt and Sandra Bullock, that of Brian Tyree Henry, our beloved Limón, raises his hand to be present in a future sequel. After all, this little scene not only revives the character, but also gives him an epic and final revenge on wheels.