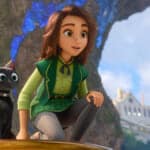 “Luck” is available to turn your day around, right now.

The inaugural feature from Skydance Animation, an ambitious division of the production company that is being overseen by former Pixar bigwig John Lasseter, has finally arrived on Apple TV+.

“Luck” is the tale of a young girl named Sam (Eva Noblezada), who feels perpetually unlucky. She’s been a part of the foster care system for as long as she can remember, to the point where she has “aged out” of her foster home and is now rooting for a much younger orphan named Hazel to find her forever home. Of course, she thinks her luck de ella might be changing when she encounters a talking Scottish cat (Simon Pegg) and follows him into the magical land of luck. Of course, nothing is what it seems and Sam could wind up turning both of their worlds upside down.

In order to pull off the ambitious vision of “Luck,” Lasseter and the Skydance Animation team turned to Peggy Holmes, who had worked with Lasseter on several DisneyToon features, including a pair of Tinker Bell features. TheWrap spoke to Holmes about the development of “Luck,” how tough it was to test an animated movie during the pandemic and whether or not Lasseter got on her case about having a talking cat in the movie (he infamously had a hard and fast rule about humans and non-humans being unable to communicate with each other).

TheWrap: “Luck” was first announced way back in 2017 with a different creative team. You came on in 2020. What was that whole process like for you?

Peggy Holmes: That’s such a great question. So I was at Skydance Animation already. I was developing a television series for them. When I was asked to consider directing this, I looked at what existed. And there were two things that caught my eye. One was the idea that Sam was growing up in the foster care system. That was number one. And number two was there was a leprechaun. For me, I grabbed those two things. I eat from a big family; family is super important to me. And I thought, Oh, we have the potential here to take someone who grew up in foster care, and ultimately have, in the story, she finds her forever family.

And also, it was my idea to think that your forever family can look many different ways. And I really was drawn to that idea that I could do something like that. And then the whole leprechaun part — I looked at that one little leprechaun and thought, What if we blow this up into a magical world that no one’s ever seen before that we didn’t know existed? It was just these muddy ideas in there that I thought, Oh gosh, I feel like I could take this very true, deep emotional core and tell it in a really magical world. And that, potentially, could be super entertaining. So I sort of said, “I’d like to do something like that.” And they said, “Let’s go.” So it was great.

They also said, “You have 18 months; get started.”

What was the hardest aspect of turning it around?

First of all, I just want to say super clearly that we feel, as many in animation do, super lucky that we were able to continue to work through COVID. We feel very fortunate to do something we love. But I think that like one of the things that Kiel [Murray, the writer] and I did, is pretend you have time. Pretend you have time. And so that became like, a way of working to just really put that aside and just go for what you want to do. And, like, somehow we’ll work it out. That became kind of, I think, a way of working actually.

Did you have more good luck or bad luck during production?

Oh my gosh, we had tons of good luck. Good luck, for sure.

And from a creative point of view, I love positive stories. I really do. Skydance and John Lasseter and David Ellison, Dana Goldberg, they really want that animation division to tell deep emotional stories in worlds that are original that we’ve never seen before. For me as an artist, I’m just glad to work in that environment. It’s super fun. John is an amazing storyteller, as we all know. He’s been a great mentor. He’s been very involved in story meetings, and he’s there as much as you need him to be and or not, you know. It’s been a great process.

“Luck” has a talking cat character. And I’ve always heard these stories about how John never allowed human characters and animals to speak to each other. Did he bring this up to you ever?

It didn’t really come up. And I don’t know why, maybe it didn’t come up because we were building a whole magical world. We’re building a world that none of us knew existed before.

Humans experience good and bad luck every day of our lives. What we didn’t know is people over here that are creating it. We just didn’t know that. And we rooted the story in so much research. We had done so much research on international icons, symbols, colors, numbers from around the world. I did a ton of research on luck itself. And I came to a very real conclusion that luck is random. That’s the thing. Luck is random. You can’t create it. You don’t know when it’s coming. It’s unpredictable. You don’t know if it’ll be good or bad luck

It’s true, there isn’t anyone throwing salt over their shoulder or not trying to step on a crack.

Other animated films have come up into a little bit of a problem because you couldn’t do screenings the same way that you could in the past because of the pandemic. How did you gauge whether or not these things were coming across?

That’s a great question. Here’s what we did — we continued to do internal screenings. But even in our internal screenings, we would send everyone a link, everyone would watch the movie at their homes. And then we’d come back together on Zoom and discuss it.

We did do an audience preview in a theater. We lucked out. COVID was down, we were able to do an audience preview. But we had to do it when the movie was only 25% animated and the rest was storyboards. You can imagine that it was a super nerve-wracking day to be in a movie theater with 500 people. But I have to say, it was such a gift that we were able to do that. Because, you know, here we are, we’re watching the movie and five minutes in Sam has some physical comedy, bad luck. And the whole audience just starts laughing. And you’re like, “Oh my god. This is amazing.” We were armed with that experience to help us finish making the movie.

And I will say also, in that audience preview, at the end of the story without giving away what happens at the end of the story, there were two moments… And I was so touched by this where the audience gasped and started clapping. They were so happy that it looked like Hazel was going to get what Sam wanted for her. And that ultimately Sam gets a forever family and they literally started clapping. So I’m like, “We are on the right path.” We were really lucky to have that one experience. 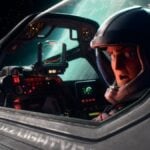