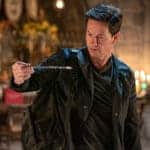 “Uncharted” is based on the popular video game series published by Naughty Dog for the PlayStation family of consoles. It stars Tom Holland and Mark Wahlberg as Nathan Drake and Victor “Sully” Sullivan, adventurers on a quest for a very big score. And it’s the kind of giant Hollywood production that is so full of twists and turns that the thrills don’t stop when the movie is over, but rather spill over into the closing credits.

That’s right – X might mark the spot, but it certainly isn’t the end of the journey.

TheWrap got to chat with “Uncharted” director Ruben Fleischer and during the conversation brought up the pair of post-credits sequences, including casting insights, scrapped ideas, and additional details.

Our Story So Far

“Uncharted” follows a young Nathan Drake (Holland), who, as we see in a brief prologue, has been fascinated by Magellan and his trip around the world. Also: the possibility that there might be a large gold deposit connected to this trip. Nathan and his brother from him Sam talk about finding the treasure as young children in the orphanage; when they were split up Nathan never knew what happened to Sam. But his obsession with Magellan and the gold remained.

Many years later, with Drake in his early 20s, he meets Sully (Wahlberg), a far more seasoned adventurer, enlists Drake’s help to find the gold for themselves. Sully thinks that a series of postcards that Sam mailed to Nathan could be the clue to discovering where the treasure is located. The clock is ticking and Nathan and Sully are up against the considerable resources of rich scoundrel Santiago Moncada (Antonio Banderas) and his ruthless mercenary Braddock (Tati Gabrielle), both of whom are also out for the gold.

Eventually Nathan and Sully team up with Chloe (Sophia Ali), another treasure hunter, to track it down together. All sorts of shenanigans transpire, including Braddock killing Santiago, discovering them two long-lost ships of Magellan’s, and a sequence, heavily teased in the trailers, where Chloe and Nathan are thrown out of the back of a plane. It’s a lot. And while they ultimately lose most of the gold, they have discovered the most priceless treasure of them all: friendship. 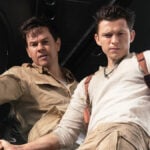 During a pivotal moment in “Uncharted,” Sully makes a confession: Sam is dead. The two used to work together, but Sam was killed by Braddock. And Sully escaped, leaving him with some extreme survivor’s guilt. Nathan had always kept up hope that Sam was still alive, despite not seeing him for years. And that twinkle of hope is still there. This is good because – surprise! – Sam is still alive.

During the first post-credits sequence we see Sam, trapped in a dusty prison somewhere, writing a new postcard to Nathan. Instead of offering him helpful clues or insight into the next big score, we’re sure that the postcard includes hints as to his whereabouts of him and ideas about how to break him out.

“That one was important to me just because I didn’t want, if we’re lucky enough to get to make a sequel for the film and we bring that character back, I didn’t want audiences to be like, ‘Wait, you said he was dead. How come he is alive now?’” Fleischer explained. “I thought it was really important that we just have a degree of reality established in the film so that it’s not like people who are pronounced dead can just come back whenever. That’s why that scene exists.”

When we asked Fleischer if he had cast a known actor in the role of Sam, he said no. “We don’t even know if we’re going to be lucky enough to do a sequel,” Fleischer explained. “But when that time comes, we’ll make sure that we get somebody great who adds to the mix.” 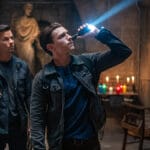 The second post-credits scene trades that moodiness and atmosphere of the first scene for something as expansive and fun as the rest of the movie. In this scene Danish actor Pilou Asbæk (from “Game of Thrones” and the excellent, underrated “Overlord”) plays Gage, a one-eyed villain dealing with Nathan. They’re in some kind of shabby bar, maybe in South America (given the other tropical locations) and the deal isn’t going well. Finally, Sully busts in, rocking a giant mustache and carrying his cat with him (earlier in the movie Nathan gets Sully a cat as a joke; now that joke has fully evolved to where Sully loves the cat and can’t go anywhere without him ).

There’s some banter (clearly Sully and Nathan are after the same artifact again) and some action, and it feels like a big, bristling action scene that could have easily been clipped out of the next movie. “It was always intended to have a tag. I’ll be honest that wasn’t the original one that we shot,” Fleischer said. “But it was always intended to have one that just suggested Nate and Sully were a bonded team that was going to go on more adventures.” Like we said – the ultimate treasure was friendship!

“The truth is just due to schedule and budgetary restraints, the original tag we shot just felt underwhelming after the movie,” Fleischer said. “But once the studio saw the film and saw how well it was working and the dynamic between Mark and Tom, they decided to invest, to shoot another tag that had much bigger scale and consequences because they agreed that allowing audiences to know that this wasn’t ‘t the end of their adventure, but more the beginning.” The intention with this tag was to declare that “Uncharted” “wasn’t just a self-contained thing,” Fleisher said. “It was always intended that they’re going to be off searching for more treasure in the future. That was super important to us all.”

As to what that original ending was that they ultimately decided to discard? “It just was really static. It was just the two of them doing a lot of exposure at a table. There was no action. There was no bad guys,” Fleischer said. “It was just a wrap up scene that felt a little lackluster after such an exciting film.” The right decision was made. Onto the next adventure!

“Uncharted” is now streaming on Netflix.