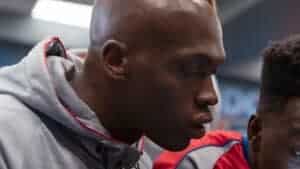 Dani Rojas’ character was originally thought of to be an Icelandic athlete signed to the team midway through the season. Instead he hails from Guadelahara, Mexico, much like Fernández.

“Back home in Guadalajara, Mexico, where I’m from, I played not the top level, like first edition, but I played professionally in the third and second division,” Cristo Fernández said in an interview with Screen Times. “That was my thing. Football was my passion since I was a little kid, until now.”

Fernández, who plays joyful and free-spirited Dani Rojas — the alternate ace player who rotates in for Jaime Tartt, has played soccer in the past. According to decide, Fernández played second division soccer in Mexico for the Tecos of Liga MX. His debut for Estudiantes Tecos at 15 years old involved playing in the top professional football division of the Mexican football league system.

“Injuries made me rethink things, and I ended up in the First Division of Puerto Rico where we were close to the CONCACAF Champions League,” he said.

You can listen to the full Screen Times interview with Fernandez on the Magic Rays of Light podcast.

As for Fernández’s favorite soccer scenes, he told TheWrap that he doesn’t just have one, but two:

“The first one is when Dani Rojas first enters the show,” he told TheWrap at the Apple FYC carpet and panel discussion Monday. “It was my first day on set. It’s an epic moment for the character, epic moment for my life. Giving the best. There are cool tricks, did it all, proud of it.”

Fernández’s other favorite moment so far is the penalty kick Dani takes at the end of Season 2, given to him by none other than usually-selfish Jamie Tartt. The direct kick brings everything full circle from the beginning of “Ted Lasso” Season 2.

“The circumstances and the weather were very extreme,” he said. “Personally, every time I watch it, I go like ‘Oh my god,’ I get my chicken skin [goosebumps]. I know you only asked for one [favorite scene] but I had to give you two.”

This video Fernández shows balling out and listing his past soccer career credits.