Westworld goes back to where it all began (again)

As we near the conclusion of Westworld‘s season four, it seems clear we’ve known the ending the entire time. We’ve known, for instance, that Bernard (Jeffrey Wright) was always going to die, that the city was going to burn, and that the likelihood that everyone would survive was…well, let’s just say, grim. As this episode reminds us, those things had already been spelled out back when we first saw Bernard decide to enter back into the world despite knowing how horrid the odds were of succeeding. But all he’s ever needed is one chance. One sliver of hope. Maybe not for himself or for those he’s recruited (including our beloved Maeve) but for the world as a whole. For humanity. And, yes, of course, for those like him.

The episode ends in chaos. With Charlotte gone (more of that in a minute) and Christina’s looped stories a thing of the past (ditto), it seems we’re driven back to the wild wild west. Metaphorically, of course, although a certain black hat seen at the closing moments of the episode suggests we’re back to where it all began: in a game where only the fittest survive. And by “fittest,” as William (the copy, but also the original, who’s sadly finally met his demise of him —at his own hands, no less) notes, he means the cruelest. “Culture does n’t survive,” the OG William tells his copy of it: “Only the cockroaches do.”

In a way, such a line sums up how the machinations inside Westworld (the game, though maybe also the show) have always operated: This is how “The Man in Black” was able to make his way to the end of the maze in season one. And it’s akin to the kind of philosophy Dolores (and therefore Charlotte) have upheld when needing to advocate for their own kind. Westworld has long been defined by the tension between cruelty and artistry, between bloodshed and storytelling. After all, who else would create something of such beauty as the hosts in Westworld only to have them be defined on any number of narrative loops?

The many dueling beliefs that structure Westworld (whether it’s Charlotte’s vs. Bernard’s, or Dolores’s vs. Maeve’s…heck, even William’s vs. Charlotte’s) all coalesce around these questions as to what remains and what survives. Is it culture or is it violence? This is why it’s always so fascinating to watch those clashes literalized in actual fights—like Charlotte fending off Maeve all while realizing she’s finally lost the plot and control of her one helpful pawn. It’s there that this show, which, let’s face it, can sometimes feel so hard to follow and whose expansive storytelling can feel needlessly obtuse (I can’t believe they made me read back on what the Sublime was!), comes alive. Not when it feels like an ontological exploration of consciousness and free will, but when such issues are grounded in visceral—and quite thrilling—sequences.

G/O Media may get a commission 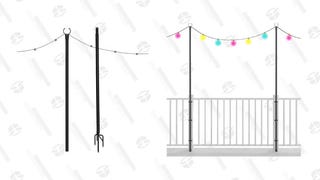 light it up
Come with two nine-foot poles, three brackets to use, and six screws, which means you’ll have everything you need except the lights. They can hold up any string light too, which means you can mix and match to suit the mood.

Charlotte may boast, like Dolores did before her, that the way to conquer the world was to become human—not in essence but in following their cruelty—but it’s clear she’s alone in this pursuit. Like an isolated princess in a tower, she’s clearly built herself a world in her own image that most others don’t find as tempting. (No wonder so many hosts keep choosing death!) It’s the kind of lesson that Bernard and Dolores had, in different ways, learned before her. There’s little room to create a world in your image that doesn’t necessarily alienate those you choose to advocate for. (It’s what Maeve tells Bernard, who, it seems, has finally learned his lesson and realized he needs to let himself go—die, even—if there’s any hope to continue the path first blazed by Arnold, his creator and predecessor.)

But enough philosophizing. Because, as ever, Westworld had one final narrative ace up its sleeve. And, again, it’s one we should’ve anticipated. After all, Christina has long been siloed from everyone else’s storylines, only interacting with Teddy—a character we all know has long been absent from this present. Also, didn’t she give us a very specific clue early in the episode? “This whole thing seems like a bad dream,” she says. “Except you.” Is she less Alice this time around and more of a Dorothy? So, of course, while it should suitably shock us to hear that while the world around her is real she is not, that doesn’t mean we don’t get to sit around and then try to figure out where (or when!) she is after all. Which is exactly what I’ll be doing for the foreseeable future as we await answers.