Golden Globes in Talks to Return to NBC in 2023 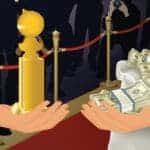 The Golden Globes are in talks to return to NBC for 2023 after a year off the air and months of controversy and reforms at the Hollywood Foreign Press Association, an individual with knowledge of the decision told TheWrap.

The individual said a deal is not done but the parties are in talks, despite a report that said the show would return.

The news comes after the embattled HFPA recently announced its plans to sell its stake in the Golden Globes to interim CEO Todd Boehly’s Eldridge Industries and turn it into a private venture, shedding the organization’s non-profit status.

NBC for 2022 canceled the Golden Globes after a Los Angeles Times article exposed that the HFPA had no Black members in its organization of its then 87 members, sparking outrage and a boycott of top industry publicists, which as of recently TheWrap had reported was still in place. One top publicist wrote in a letter to the HFPA that he felt “duped and misinformed” based on the organization’s decision to sell.

As part of their reform efforts, the HFPA expanded their membership to 102, six of whom are Black, but fell short of its previously stated goal for new Black members. It also announced plans to expand its voting pool, inviting non-members of the HFPA to vote on the awards without offering them membership privileges, extending invitations to Fipresci, the international organization of film critics, as potential voters. Some of the other changes to the HFPA have involved banning members from accepting gifts and removing a cap on adding new members, and the organization also partnered with the NAACP on its reform efforts.

See also  Will the 'Young Avengers' make it to the MCU? Kevin Feige offers a new perspective

These changes weren’t well received by some incumbent or by the publicists demanding changes, and in March the Globes’ longtime publicist Sunshine Sachs dropped the HFPA as a client, as did other diversity and inclusion and crisis PR advisers.

NBC has broadcast the Golden Globes since 1996 and in 2018 signed an eight-year deal with the HFPA for $60 million a year to continue to broadcast the awards show.