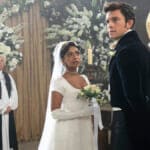 Watch TheWrap’s full Q&A with Sophie Canale and Erika Ökvist at this link.

After working closely with each other throughout “Bridgerton” Season 2, it was only fitting that costume designer Sophie Canale learned she was nominated for an Emmy from hair and makeup designer — and fellow nominee — Erika Ökvist.

“I actually found out through Erika calling me, which was a lovely surprise,” Canale, who is up for the Outstanding Period Costumes award for Episode 207, “Harmony,” said during TheWrap’s screening series, featuring the “Bridgerton” team. “And it was just so nice for us to both have that conversation together.”

“Yeah, I was so happy,” Erika, who got a nom for Outstanding Period And/Or Character Hairstyling for the Season 2 finale – “The Viscount Who Loved Me” added. “I was so happy because I was on set. And Annie Laks [senior vice president of creative content] from Shondaland phoned me and was like, ‘Hey, I think – yeah, you are. You’re nominated for an Emmy.’ I was in the crowd tent and I just screamed out, but I did it in Swedish and nobody understood what I said. And then I kind of collected my thoughts and I looked it up. And I was like, ‘Oh, and Sophie as well!’ So I just phoned her like literally within seconds of finding out myself.”

Canale and Ökvist were heads of their respective departments in Season 2, the first on the show for both of them (Canale was an assistant costume designer in Season 1, and Ökvist joined “Bridgerton” for Season 2). With the challenges of the ever-expanding “Bridgerton” world, that also included introducing the very important Sharma family, who’d traveled to London for the season from India, there was endless work. Luckily, the women found they were on the same page with many ideas.

See also  The forgotten languages ​​of Mexico City: Feathers of the Serpent

“Erika and I met early on in prep. As soon as Erika was on board, I was sharing costume ideas and costume designs,” Canale said. “And Erika and I have got a very similar eye in the way of design, and it was very easy for us to collaborate with one another. It was really great fun. Immediately we just kind of clicked.”

When the Sharmas – Kate (Simone Ashley), Edwina (Charithra Chandran) – made their debut, they did so harmoniously. Elder, strong-willed sister Kate often opted for rich purples and lavenders, while the younger Edwina leaned into creamy whites and pinks. Those choices helped to show how they worked together, while also “symbolizing who they are as people,” Canale said.

“[Kate is] such a force of nature herself, she’s such a strong character that I wanted her to be bold initially. you could see [it] in her color choices,” she explained. “And then with Edwina, she’s so much softer as a character and having her de ella in pinks is the color of love. And that really is her journey from her and that’s where she wants to be. 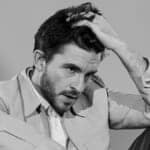 Ökvist also found ways to incorporate not only the characters’ personalities, but how they grew during the eight episode season, through their hairstyles. Kate began as a “very no nonsense character” Ökvist noted, who braids her own hair to go out riding. She was prim and proper, with every hair in place when she attended social events. Then, as Kate fell in love with Viscount Anthony Bridgerton (Jonathan Bailey), her hair looks softened.

See also  Who is Wildcard Orca on Masked Singer? Identity and clues explained

For the Queen Charlotte character, though, Ökvist always went for big and bold wigs. When the queen entered any scene she was in, Ökvist saw her job as making sure Charlotte, played by Golda Roshuevel, was noticed.

“I’d like to surprise everybody when we see her. I’d like it to be a wow factor every time that we see her,” she explained, adding that she worked hard to make sure that Charlotte’s wigs were “seamless with the costume” and jewelry.

“So, for instance, in the Diamond Ball, which is one of my favorite wigs, I wanted to create a shape that you haven’t necessarily seen in a Georgian wig before,” Ökvist said of her inspiration. “And so the architectural build of it obviously is quite important because hair is very, very heavy.”

“How Golda actually managed to carry it off, I don’t know,” Ökvist added. “But she has developed this incredible glide, where it looks effortless to wear these wigs which are absolutely both uncomfortable and hot and incredibly heavy.” 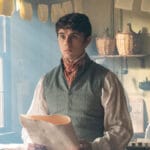 In the Season 2 finale, “The Viscount Who Loved Me,” which is the episode Ökvist received an Outstanding Period And/Or Character Hairstyling nomination for, Roshuevel’s Queen Charlotte attends the Featherington ball wearing an absolutely stunning wig. And if you look closely at the detail, you’ll see that within the wig’s height, the hair has been molded into rose-like shapes.

“I think that with hair, you’ve only got like two textures: one is smooth and one is curly. And it can be very curly or just a little bit curly, and I just thought I want to have another texture because [the] camera loves very rich textures,” she said. “So we decided that we were going to sort of line the whole of the wig with roses that were made out of hair. And how you make them is very time consuming. You actually start with a braid, would you believe it or not? And then you kind of pull the braid with products and do petal by petal. So as you can imagine – I think she had about 50 roses in her hair from her, and then that took quite a long time.

See also  Loki receives his biggest upgrade due to [SPOILER]

The episode Canale received an Outstanding Period Costumes nomination for – 206, “Harmony” – featured so many costumes, it would be hard to estimate just how many. There were gowns, cravats, waistcoats, spencers, cloaks, reticules and hats needed for a ball, an art gallery exhibit, and the moment when the Bridgerton family and the Sharmas both chose to promenade (walk) in the park among the ton after Anthony’s failed wedding to Edwina Sharma.

“I really wanted to kind of bring this element of outdoors to Season 2, so spencers – little jackets – I used quite a lot of pashminas as well just to kind of give this element and also to keep people warm as well,” Canale said . “And reticules – bags – were very key to the costume design.”

Watch the full Q&A with Canale and Ökvist from “Bridgerton” here.