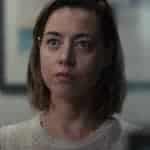 When we meet Emily (Aubrey Plaza), she’s already a criminal. Writer-director John Patton Ford’s debut feature “Emily the Criminal” isn’t an exploration of how Emily becomes a criminal, but rather, how she learns to embrace criminality as her identity, her gift, and her escape from a world that’s built to keep her down.

This tough, gristly crime thriller is a searing indictment of late-stage American capitalism, and a showcase for star and producer Aubrey Plaza to reveal a steely new side to her talent.

The cagey Emily is as lean and mean as Ford’s taut screenplay. We meet her in an interview for a medical administration job, jittery, defensive, and coiled tight. When the interviewer probes her about her her permanent record — a DUI here, an aggravated assault there — Emily storms out, refusing to explain but, really, refusing to beg for his mercy and forgiveness from her.

Within a matter of minutes, we understand Emily’s plight: $70,000 in art-school student loan debt, her gig delivering corporate catering barely covering the interest. She’s living with roommates in a crappy LA apartment while her ella best friend Liz (Megalyn Echikunwoke, “Late Night”) has a posh advertising career, jetting off to Portugal for photo shoots. Emily’s only safety net is crawling back home to New Jersey to crash with her stepdad.

How’d she like to make 200 in cash? It’s illegal, but it isn’t dangerous. We don’t even need to fully understand her to know she’ll take this deal. Who in her situation would not her?

Emily texts the number she’s been given and shows up to a strange meeting led by a man named Youcef (Theo Rossi, “Army of the Dead”). She’s given a credit card with a stolen number and tasked with purchasing a TV. She makes 200 bucks. How’d she like to make 2,000? She she would. And she thus she begins a beautiful friendship with Youcef that is mutually beneficial, at least for a time. 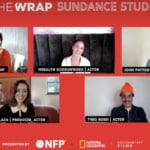 Vacant and dissociative when she’s around her wealthy friends, Emily is a cipher, always spouting the right answers. But when she’s in peril, she comes alive, and Plaza makes this switch beautifully in her performance of her. Emily is present, instinctual, street-smart, and quick on her feet and with her hands. She acts without overthinking and isn’t afraid of violence. Her fearlessness of her, or her willingness to overcome her fear of her, is what makes her dangerous. We watch Emily evolve over a series of incidents and violent escalations as she learns the tools of her trade from Ella from Youcef, forging a bond that goes beyond just business.

Ford is wise to keep Emily’s psychology close to the vest; the assault charge lies in the background, just beyond our full understanding, but informing Emily’s choices of her along the way. It’s not just that she’s capable of violence, but her criminal record of her is also apart of the structural obstacles she has faced.

We understand Emily’s choices because she’s an unprotected gig worker with a criminal record in debt for her dreams. Even as she earns money with her de ella credit-card-fraud side hustle, she continues trying to claw a foothold for herself in a traditional, above-board workforce. However, it’s her disgust and refusal from her at an unpaid design internship that’s the last straw for Emily, underlining the exploitative and extractive nature of white-collar creative industries. 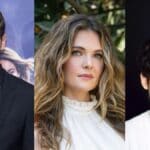 This efficient, bracing social drama proves that a lot can be said with a little, and as a director, Ford focuses on the sprawling, secret underclass of LA, found in swap meets, gnarled in traffic, bleeding on asphalt, securing the bag under the cover of darkness on a bus from the Valley. He presents a world that’s below the hillside homes and populates it with realistic supporting characters, from the guys who buy Emily’s stolen goods to the Armenian gangsters she tangles with to the pompous art-world posers she meets through Liz.

But cinematographer Jeff Bierman keeps his camera tightly locked in on Plaza as Emily, because she is the eye of this hurricane, eerily calm and always in motion. While their accent work is occasionally wobbly, both Plaza and Rossi bring an immediacy of presence to their performances. Moving beyond the signature deadpan snark that made her a star, this is easily Plaza’s best and most complex performance of her yet, a signal that she is ready for deeper dramatic work or a bigger action thriller.

In 95 minutes, Ford unfurls a gritty and suspenseful LA noir that also serves to examine the structural issues that uphold wealth inequality in this country. But “Emily the Criminal” isn’t trying to be preachy or political, it’s just authentic, and urgent, and Plaza’s performance keeps the emotional and physical honesty at the forefront.

In wrapping capitalist criticism in a crime drama about an individual consistently locked out of traditional modes of advancement, “Emily the Criminal” isn’t so much Aubrey Plaza’s “Heat” as it is her “Scarface.” Floating somewhere in the liminal space between humanity and sociopath, Tony Montana and Emily seem to live by the same morally suspect, ruthlessly survivalist code.

“Emily the Criminal” opens in US theaters August 12.