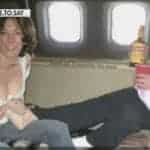 Fox News host Brian Kilmeade has taken to social media in an effort to clean up the mess that was made Thursday night when the network aired a meme of Ghislaine Maxwell massaging Jeffrey Epstein’s feet.

The image, superimposed with a photo of the judge who approved the warrant the FBI served this week on Donald Trump’s Palm Beach estate, aired “in jest,” according to Kilmeade.

The meme seemed to take Kilmeade by surprise at the end of “Tucker Carlson Tonight,” which he was guest hosting. It aired as a full-screen as he handed off to Sean Hannity, who eventually corrected Kilmeade that it was a meme and not a genuine photo.

“This is the judge in charge of the, of the, of the, um, as you know, of the warrant,” Kilmeade said, repeating “of the uh” four times before continuing to his next thought. “We’ll see if he’s going to release it next — he likes Oreos and whiskey.”

“I think that’s actually a picture of Jeffrey Epstein with somebody putting [Reinhart’s] head on there.” Hannity said. “I’m guessing, I don’t know.”

On Friday afternoon, Kilmeade made an effort to portray the short segment as a joke. You can watch it at the top of this post.

The edited photo linking the child sex traffickers to Judge Bruce Reinhart made the rounds after Reinhart went into hiding due to death threats and anti-Semitic attacks after his authorization of the FBI’s warrant to raid Trump’s Florida mansion.

Reinhart also worked as a prosecutor on the Epstein case as well as a defense attorney for Epstein’s employees, and many of the intimidations toward the judge stem from this connection.

According to The Times of Israelthe threats have “appeared on right-wing social media platforms and message boards, where users have published the judge’s name, address and personal information.” 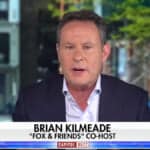 According to the AP, the DOJ has been investigating classified records found at Mar-a-Lago by the National Archives and Records Administration, which referred the matter to the Justice Department upon discovery. Removing classified documents is a felony – though Trump could argue that he had the authority to declassify the documents as president.

US Attorney General Merrick Garland said he “personally” approved seeking a warrant for the FBI’s raid on Donald Trump’s resort home, but did not specify the reasons behind it, nor did he say Thursday what was taken during the unprecedented early-morning raid.

See also  Oscar Race After the Festivals: 'The Fabelmans' Is on Top