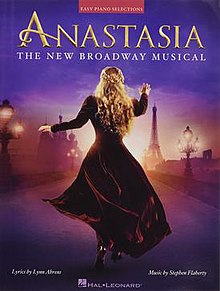 Ever since I was a teenager, I’ve been obsessed with the fall of the Romanov dynasty in Russia. Whenever I see works for fiction and literature ignoring the facts, I simply assume it’s a day and go back to the books I have on my shelf like Edvard Radzinsky’s The Last Tsar: The Life and Death of Nicholas II.

It’s doubtful that anyone who watched the Starlight Theater’s current production of Anastasia expected a history less. Thankfully, the touring play consistently delivers eye candy worthy of a Faberge egg.

The musical from writer Terrence McNsally, composer Stephen Flaherty and lyricist Lynn Ahrens (the trio behind Ragtime) draws its inspiration from 1997 cartoon, so the visual pizazz is to be expected. Thanks to a series of backdrops and projection, the play can change location and time as easily as movies can.

The history be damned tale starts in 1917 St. Petersburg, just before the Russian Revolution and quickly moves ahead a decade where the renamed city Leningrad is abuzz because the heir to the Russian throne, the Grand Duchess Anastasia might still be alive.

The play never answers how she survived when the rest of her family perished, but the ambitious Deputy Commissioner Gleb (Ben Edquist) sees her as a threat to the fragile order of the new Soviet Union. Meanwhile, two struggling with artists Dmitry (Sam McLellan) and Vlad (Bryan Seastrom) think they can convince the still-grieving Dowager Empress (Gerri Weagraff) that just about any woman living in the streets of Leningrad could pass as her missing granddaughter de ella .

The search for the proper imposter proves more difficult than anticipated even though Vlad himself has spent decades posing as an aristocrat. Their most promising candidate is a street sweeper named Anya ((Kyla Stone), who takes to Vlad’s instruction from her with astonishing ease. Ironically, the ruse may be easier for her because she’s an amnesiac, so the invented history might actually be true.

Because she projects the right blend of innocence and latent sophistication, Stone effortlessly anchors this current touring production. Her clear, confident singing voice of her certainly does n’t hurt.

The late McNally has retooled the storyline of the animated movie in a manner that is both more logical and entertaining. The less said about the cartoon’s version of Rasputin, the better. Gleb makes a lot more sense as an antagonist and Edquist has just enough charm to make viewers tolerate how slimy and single-mined he can be.

The romance between Anya and Dmitry feels as if it were copied and pasted from another musical. It’s more fun to watch the wily Vlad woo a countess (Madeline Raube) than it is to watch the leads discover each other.

The weather on Tuesday night was pleasant, but occasionally motorcycles reminded me why the outdoors and musicals may not be the best of combinations.

At the same time it was rewarding to see the play in the Swope Park surroundings where the scenery could compete with the images on stage.