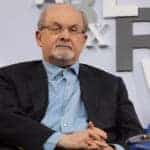 Salman Rushdie suffered extensive injuries in an attack earlier Friday and remains on a ventilator and unable to speak, his agent, Andrew Wylie told the New York Times Friday evening.

“The news is not good,” Wylie said via email. “Salman will likely lose one eye; the nerves in his arm were severed; and his liver was stabbed and damaged.

Rushdie has faced death threats for decades over his book, “The Satanic Verses.” He was stabbed in the neck and abdomen by a 24-year old man from New Jersey, who has since been arrested.

See also  Is AFC Richmond a real team? What is Ted Lasso's soccer club based on?