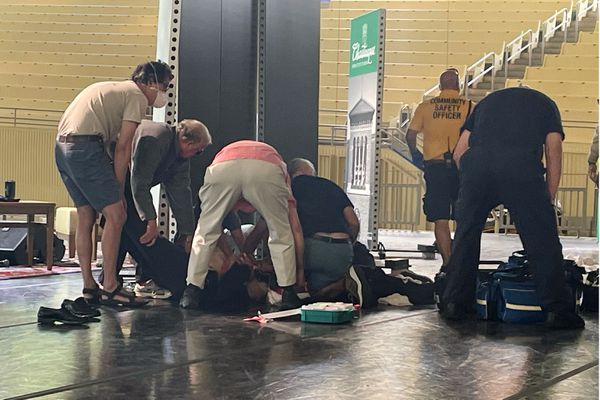 Salman Rushdie, who spent years in hiding and under police protection after his novel The Satanic Verses prompted Iranian officials to call for his murder, was stabbed in the neck on stage Friday during an event in Western New York.

The 75-year-old was airlifted from the Chautauqua Institution, near Lake Erie, to a trauma center, where he underwent surgery. Mr. Rushdie was on a ventilator, his agent, Andrew Wylie, said. The attack sparked swift condemnation from world leaders and Mr. Rushdie’s literary colleagues. New York State Police said at a news conference on Friday that a 24-year-old suspect was in custody.

Mr. Wylie said in a statement that the author will likely lose an eye, and has severed nerves in his arm and a damaged liver. “The news is not good,” the statement said.

Police identified the suspect as 24-year-old Hadi Matar, of Fairview, NJ He had obtained a pass to enter the institution’s 750-acre grounds, according to Michael Hill, Chautauqua’s president. Police did not say anything about what the suspect’s motive may have been.

Mr. Rushdie was scheduled to give a 10:45 am lecture as part of the institution’s summer program. The theme was “More than Shelter: Redefining the American Home,” and Mr. Rushdie was to have been interviewed by Henry Reese, the co-founder of a non-profit organization that offers residencies to writers facing persecution. The pair had just been introduced when, according to several attendees, a man dressed all in black climbed the stage of the outdoor amphitheater and rushed at the author.

From her seat to the right of the stage, Susan Toller said, it looked like the man was hitting Mr. Rushdie with his fists, before Mr. Rushdie was knocked to the ground. For a few seconds, she said, the audience sat silent, stunned.

“We are all just shocked, wondering, is it some weird joke?” said Ms. Toller, who attends the program annually with her family.

Quickly after, a dozen or so people climbed on stage and began to separate the two, with half the group holding down the attacker and the other half tending to Mr. Rushdie. A doctor in the crowd immediately began offering first aid.

Video posted to social media of the aftermath of the attack showed a lone police officer on stage with a dog, raising questions about the lack of security for such a prominent and controversial figure.

A brief video captures the scene in a lecture hall in western New York moments after author Salman Rushdie was stabbed. Rushdie was flown to hospital by helicopter for treatment. The man who confronted Rushdie on stage at the Chautauqua Institution was arrested.

The Globe and Mail

“We were all wondering why there wasn’t security there … we saw Jesse Jackson speak here a number of years ago, and there was very visible security that day around the amphitheatre,” Ms. Toller recalled, noting that this was not the case Friday.

Paul Evans, who travels from California each year to attend the program, was similarly surprised by the lack of security, given the decades of threats against Mr. Rushdie.

See also  Rugrats' Reptar and 9 other television tributes to Godzilla

“He just hopped up on the stage,” he said of the attacker. “There was no one standing around with sunglasses on, talking into their sleeves.”

Though it’s technically a gated community, Mr. Evans described the venue as a “soft spot.”

In addition to permanent members, visitors can attend on day passes. “But there’s no metal detectors and anything like that,” Mr. Evans said. “We’ve had presidents here and they bring their own security – police, helicopter, satellite phones and all that. And there’s never been a problem. But, you know, all it takes is one person who slips through the cracks.”

Anyone without a long-term pass was being turned away from the campus Friday evening. Officials said at Friday’s news conference that a New York state trooper and sheriff had been assigned to the event prior to the attack, and had taken the suspect into custody.

Mr. Reese suffered some face injuries in the attack, and was treated and released.

Mr. Rushdie, a former president of PEN America, has been a prominent spokesperson for free expression.

“He has been living under the threat of death for over three decades and yet still is writing books and speaking publicly. He has often said that while his case of being threatened by a government for what he had written was prominent and well known, there are hundreds of other writers who are facing similar threats who are not well known. He knows he’s not alone – he’s simply known.”

The Satanic Verses was viewed as blasphemous by many Muslims, who saw the book as being insulting to the Prophet Muhammad. In 1989, the Iranian leader Ayatollah Ruhollah Khomeini issued a fatwa calling for the death of Mr. Rushdie, who was subsequently placed under police protection by the British government.

A Japanese translator of the book was stabbed to death in 1991. An Italian translator survived a knife attack. In 1993, the book’s Norwegian publisher was shot three times and survived.

In 1992, Mr. Rushdie made his first postfatwa public appearance, at a PEN Canada benefit in his honor at Toronto’s Winter Garden Theatre. It was an unannounced appearance, under heavy security. “There was an audible gasp when he appeared on stage,” Ms. Westcott said.

Mr. Rushdie summarized making scheduled public appearances in 1995. In 2017, he appeared in a Curb Your Enthusiasm episode that mocked the fatwa against him. “Oh, I have to live my life,” he told The New York Times last year.

The mission of the Chautauqua program is “to build bridges across difference,” Mr. Hill said at Friday evening’s news conference.

“I think the worst thing Chautauqua could do is back away from that mission… and I don’t think Mr. Rushdie would want that either.”

Maryland Congressman Jamie Raskin, a leading member of the House committee investigating the Jan. 6, 2021 riots, is scheduled to hold a talk at the amphitheater on Monday.

With reports from Reuters and the Associated Press