Why Corn Puddin Needed to Be the Tune to Represent Schmigadoon! at the Emmys 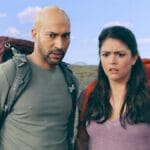 For the last two decades, Cinco Paul (along with writing partner Ken Daurio) was best known for writing big-deal family movies your kids were begging you to take them to (“Despicable Me,” “Hop” and “The Secret Life of Pets” among several others). But all the while he had a musical percolating in his head, partially based upon a what-if set-up involving the backpackers of “An American Werewolf in London” entering a musical-scape instead of a horror-scape. And thus, 2021’s hit AppleTV+ series “Schmigadoon!” — starring Cecily Strong and Keegan-Michael Key in a far less furry, significantly more comic version of the “London” scenario — was born.

Also starring a veritable who’s who of Broadway talent (including Kristin Chenoweth, Alan Cumming, Jane Krakowski and a pre-Oscar’d Ariana DeBose) and borrowing liberally from the Great American Musical heyday of shows like “The Music Man,” “Carousel” and “The Sound of Music” among a great many others, “Schmigadoon!” proved popular enough for fans to demand a second season, which just wrapped and will be entitled “Schmicago!” Showrunner Cinco Paul talks about what we can expect from that, why he needed to see this through in a more solo manner, and why the charm song about food was the best way to get Emmy’s attention.

Congratulations on your Emmy nomination [in the music and lyrics category]! Was “Corn Puddin’” your idea to put in for consideration? Because you could have essentially filled the category with only songs from this series.

Oh, thank you! Well, that was something we talked about sort of strategically, and I think it’s so you don’t split votes or whatever. “With All of Your Heart” was another one I was really fond of. And then some people mentioned “Tribulation.” But ultimately, “Corn Puddin’” is the one that got the biggest response throughout the season and the most listens on Spotify by far. And it’s a great ambassador for the show, very emblematic of what the show is all about. It also sort of plays with the charm song idea, the song that does nothing for a show, like “Shipoopi” or “A Real Nice Clambake.” It’s ironically in our show, though it does move the story forward because it causes Keegan’s character to say, “I’m done.”

And it’s also the first time Cecily sings in the series.

Exactly. And she sort of experiences the magic of knowing how to rhyme.

You managed to get this incredible roster of actors who can do anything, and even the two leads who are not known for musical theater have terrific voices. Did you adjust anything knowing that you were going to have all these people intact?

Kristin’s picture was always posted in our writers’ room. And the Countess character was created explicitly for Jane Krakowski. But the intention was to hire Broadway actors, people who’ve done eight shows a week because I wanted as much live singing as possible. And we were able to get them partially because of COVID. There wasn’t a lot of theater going on and people were more available than they typically would be. 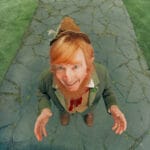 This project isn’t a duo thing where you’d usually write with Ken, though he’s written a bunch of episodes of “Schmigadoon!” So, what was that like to kind of take the reins alone here?

Ken he really didn’t want to do TV and wanted to go decided back to animation. So, it was sort of a shock initially, because having worked with him for all those years and having a partner, I did feel a little alone initially. But it was nice to have the writers’ room and their support plus all these great writers in addition to Ken (like Julie Klausner, Bowen Yang, Kate Gersten and Allison Silverman) to help out. “Jane the Virgin” is a show I loved that has the same optimistic spirit but also plays with genre, and I kind of befriended the creator Jennie Snyder Urman. She invited me to sit in her writers’ room a couple of times because I had never experienced that. There wasn’t a huge template out there, so it was kind of a hard sell, but thankfully Apple kind of fell in love with it.

So, you all just wrapped Season 2. Will it be more in the Great American musical tradition or are you going a little later in the timeline musically?

We’re in the next era of musicals, ’60s and ’70s. So, it’s Fosse and Kander & Ebb and Schwartz and Sondheim and Lloyd Webber, all of those. It was a really fun area to play around in.

“Schmigadoon!” is now streaming on AppleTV+