‘100 Foot Wave’ Emmy-Nominated Cinematographers Reveal How They Caught All Those Sick Swells: ‘The Ocean Is King’ 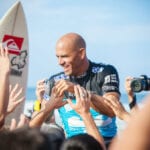 In his 50s, surfer extraordinaire Garrett McNamara decided he would chase the mythic 100-foot wave with the aid of a technique called “tow surfing” (which uses jet skis to change extremely large swells) and would head to a once-sleepy, old town in Portugal called Nazaré to accomplish that goal.

Naturally, the ocean had its own plan. HBO’s six-part documentary “100 Foot Wave,” directed by Chris Smith of “American Movie” fame, is an all-compassing view if this journey – not to mention a comprehensive deep-dive into the daily mental and physical rigors of surf culture .

To capture all of the shiver-inducing reality of this world, McNamara and Smith are going to have send some additional live bodies into the surf. Enter cinematographers Mike Prickett and Laurent Pujol, who have devoted their lives to oceanographic photography even while living in wildly different locales. (Even their interview was conducted from Hawaii and France, respectively.) Similarly, they filmed this project with some distance between them, one of them on land, one of them at sea.

“The ocean is king, and it decides when it’s good and right. We’ve got to be there pretty much all day on standby. Morning time is realistically when you know it goes down,” says Pujol, who assumed water duty on “Wave”. Prickett simultaneously sets up on land and surveys the panoramic details. “We have people up at the point getting different angles from the cliff, and then some down on the beach, getting ready for rescue scenarios or whatever, and then I’m doing long lens stuff. We had about 12 cameras on this project, everything from a RED Monstro to GoPros and Z Cams, including gimbals on jet skis, including the one Laurent is on, and attached to buggies that can go up and down the beach.”

One of the wonderfully revealing, cyclical narrative hooks of “100 Foot Wave” is how the agony and the ecstasy of this lifestyle — much of it filtered through family man McNamara’s mental wrestling with what he can actually accomplish in his head versus the reality of it all — is shown in equal measure. The dangers of the sport are absorbed by everyone, including the crew. 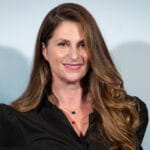 “Fill him in on your wipeouts, Laurent!” Prickett insists with a laugh. He adds that catching a camera in the mouth or an unkind wave disorienting you is not uncommon, though the veteran photographer speaks from hard-lived experience. “I broke my leg and my ribs at Jaws [a big-wave spot in Hawaii’s North Shore]and then I actually got badly injured in Tahiti shooting [the 2012 Gerard Butler film] “Chasing Mavericks,” and I’m still paralyzed from the waist down from my injury.” Adds Pujol: “There are a lot of close, close calls. You really just hope for the best.”

And since everything is done in real time, you have to hope everything aligns – but sometimes it doesn’t, as in one pivotal moment in the documentary where a surfer catches an incredible, career-changing wave on location, and nobody captures it photographically . 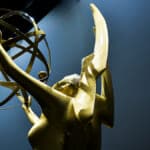 “As soon as you change your batteries, something intense and crazy happens. You just got to deal with it,” says Pujol, noting their job is often exactly like that of the subjects at times. “It’s really hard to be everywhere,” says Prickett, “but now you can shoot all day long. I started shooting in 1979, where we shot Super 16 and 35mm and if you’re shooting high speed, at 100 frames a second or whatever, you’re running around in two or three waves and that’s it. You’ve got to go change your mags and there’s all this madness. Nowadays, people go out there and they have like 1 terabyte cards or whatever and can shoot off every wave that happens all day long. It’s actually been a total game changer.”

Most interestingly of all, Prickett and Pujol even appear as subjects in “100 Foot Wave,” which of course creates a different sense of capture. “I got a little worried at first and wondering if while we’re stressed and running around screaming if I should unplug the camera realizing that [director] Chris had just done “Tiger King”. And I was like, ‘Oh my God’, remembering how he kind of got people on the sly,” laughs Prickett. Pujol definitely agrees with that, laughing: “That was everybody’s main concern in the beginning.” 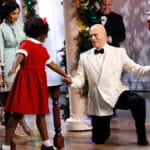