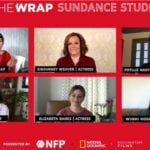 In the first trailer for “Call Jane,” it’s 1968 in Chicago, and Elizabeth Banks has just learned that she has only a 50% chance to live if she were to give birth. While her doctor recommends an emergency termination to the pregnancy to save her life, a medical board of men all votes “no” in performing the procedure and lets her know her to her face.

“I’m here, I’m right here,” Banks says feebly in front of this body of men that barely notices her.

That’s the set up for this pre-“Roe v. Wade” era drama called “Call Jane,” which tells the true story of a group of women who lead an underground movement designed to help women get abortions they desperately need. The film shows how Banks goes from a woman in need to a woman on the front lines of the abortion fight.

“Call Jane” first made its premiere at the Sundance Film Festival early this year, and while it was still timely then, it’s even more urgent now as the Dobbs decision has made abortions illegal again in many parts of the country.

Roadside Attractions is releasing “Call Jane” in theaters on October 28. You can check out the first trailer above. 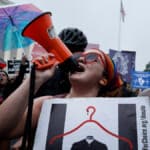