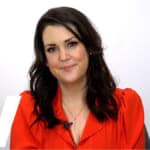 This story about Christina Ricci and “Yellowjackets” first appeared in the Down to the Wire: Drama issue of The Wrap’s awards magazine.

Christina Ricci has made her share of comedies over the course of a career that began when she was a child, but her heart has always seemed to be in darker material like “The Ice Storm,” “Buffalo ’66,” “Prozac Nation” and “The Lizzie Borden Chronicles.” So it makes sense that she’d join the cast of the Showtime limited series “Yellowjackets,” playing one of the survivors of a plane crash that happens to a group of high-school girls in a remote wilderness.

The show, which jumps back and forth between the crash and the grown-up characters more than two decades later, is a dark mystery with lots of disquieting elements — but Ricci’s character, Misty, is an awkward and unsociable woman who often brings a comic touch to the show.

“I am not a comedian,” said Ricci, whose work on “Yellowjackets” landed her second Emmy nomination, after a 2006 nom for a guest appearance on “Grey’s Anatomy.” “When I focus on laughs, it’s terrible. So it was challenging for me to play a character that was the comic relief.

“As an actor, I tend to over-empathize with my characters. The hardest thing for me was to feel like the character was being laughed at all the time.” To that end, she worked with the series’ hair and makeup team to tone down Ella’s Misty’s look so she wasn’t too cartoonish — though between the glasses, frizzy hair and kittens on her sweater, she’s still pretty geekish.

“It was a very strong look, but I wanted to make sure it was realistic,” she said. “So we played down the kind of glasses she was originally supposed to wear, and cut the hair into something believable.”

When she agreed to play Misty (with Sammi Hanratty taking the part in the frequent flashbacks to the mid-1990s), Ricci didn’t know much about the twists that would both transfix and baffle fans. But that didn’t matter, because the pilot script she received included a single scene in which Misty, a nurse in a facility for the elderly, withholds a cranky patient’s nightly morphine dose, smiles sweetly and then whispers, “Don’t f— with me.”

“I would have wanted to do it based on that one scene,” she said. “It’s such an incredibly well written, succinctly informative scene. I am fascinated by deviant behavior. Like, what’s it like to go home at night with the nurse who abuses old people? What does she do at home? What does she do for fun? All of that stuff is, for me, very exciting.” 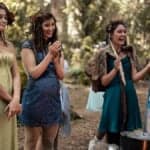 The chirpy but manipulative and controlling adult Misty, she added, was formed partly by the experience that followed the plane crash, when she turned out to have skills that made her invaluable, but also by the bullying and isolation she’d endured in her life before that point.

“She is a character who has a very strong motivation all the time,” she said. “Ella She has this compulsion to try to connect with people and take from them whatever it is that everyone else seems to get from friendship. I think that existed before the crash, when she was all of a sudden valuable and had social currency. And she’s always desired that again, because when they were rescued and she came back to this society, she was again, completely valueless and alone.”

The series was filmed in Vancouver during the COVID pandemic, and Ricci supplied some additional complications because she was pregnant with her second child during the entire shoot. “I was able to hide it for a really long time,” she said. “But when I was six months pregnant, I had to tell them because it was starting to show.”

She laughed. “Then I was able to say stuff like, ‘Actually, I can’t bend down and pick that up off the floor. Sorry guys, I gotta sit down.’”

Ricci made her acting debut at the age of 9 with Cher and Winona Ryder in “Mermaids”; she’s now 42, which means she’s been an actress for more than three-quarters of her life. “Everything came very easy to me when I was younger,” she said. “I didn’t think about it much — because I was acting but also trying to come of age myself, I didn’t give it the attention and passion that I do now.

“Now, for me, it’s very much an art form. The thing that has changed over the years is that I am now fully committed and love every minute of the process. It’s precious to me, I guess.”

Read more from the Down to the Wire issue here.