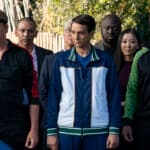 Unlikely alliances may be on the horizon for Netflix’s “Cobra Kai” as the Season 5 trailer teases the show’s biggest conflict yet.

Following the shocking results of the All Valley Tournament in the fourth season, Season 5 finds Terry Silver (Thomas Ian Griffith) expanding the Cobra Kai empire and trying to make his “No Mercy” style of karate the only game in town. With Kreese (Martin Kove) behind bars and Johnny Lawrence (William Zabka) setting karate aside to focus on repairing the damage he’s caused, Daniel LaRusso (Ralph Macchio) must call on an old friend for help.

In the first trailer for the show’s return, Daniel, Johnny, and Chozen join forces to stop Silver as his grand ambitions for Cobra Kai, which is now reaching beyond the Valley. Despite the high-flying tensions between Miguel (Xolo Maridueña) and Robby (Tanner Buchanan) in the trailer, a mending of fences may be in their future as well as Johnny looks to fix his relationships with his son and surrogate son of him.

It’ll take unexpected teamwork between the Miyagi-Do and Eagle Fang dojos to take down Silver now that Kreese is behind bars. Speaking of which, could redemption be within reach for the former antagonist? We’ll have to wait to find out.

See also  Tributes Pour In for Dallas Good of the Sadies | Exclaim!

Watch the “Cobra Kai” Season 5 trailer in the video above.