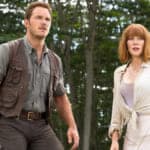 Colin Trevorrow’s “Jurassic World: Dominion,” the sixth film in the franchise that started with “Jurassic Park” back in 1993 and the third in the new “Jurassic World” segment of films, has racked up nearly $1 billion worldwide.

And yet the response to the latest film, at least critically, was pretty muted – some viewers felt that the narrative was haphazard, with the threads following the original characters and the one following the newer characters never really getting enough time to breathe.

Well, with a new director’s cut now out on digital and Blu-ray/4K, those criticisms might be addressed, with roughly 14 minutes of new footage, including the wonderful, wordless prologue that found its way online earlier this year. Even Trevorrow prefers you watch this longer version.

Trevorrow tweeted, “Friends don’t let friends watch the theatrical cut,” with an image of the cover for the 4K version of the extended “Jurassic World: Dominion” cut.

When TheWrap spoke to him shortly before the movie’s release, he hinted at this extended version of the movie but didn’t express a preference one way or another. Clearly, he has spoken – the director’s cut is the version he likes more and is the version that he is encouraging everyone else to watch. This version is now widely available.

If you haven’t seen “Jurassic World: Dominion” at all, it follows “Jurassic World: Fallen Kingdom” and imagines a contemporary planet that is beset by all sorts of prehistoric beast. Some, like Claire Dearing (Bryce Dallas Howard) and Owen Grady (Chris Pratt) are working to protect the dinosaurs, while others are merely interested in exploiting them.

The original characters (played by Jeff Goldblum, Laura Dern and Sam Neill) are trying to solve a mystery involving primordial locusts (yes really), while the new characters are trying to save their adopted (clone) daughter and, wouldn’t you know it, the story lines intersect at a corporate preserve for the dinosaurs that very much resembles a Jurassic Park-style theme park. 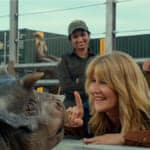