‘Lord of the Rings: The Rings of Power’: Morfydd Clark Followed in Cate Blanchett’s Footsteps to Make Galadriel Her Own 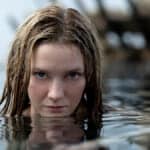 Morfydd Clark has big ears in “The Lord of the Rings: The Rings of Power” – she is Elven, after all. Starring as Galadriel in the Prime Video prequel series set thousands of years before the Peter Jackson films (and the original Cate Blanchett performance) that made the famous character, Morfydd said “Rings of Power” felt like an opportunity to put her own stamp on the role.

“It’s been really exciting to explore, like when playing a canon character, how they become who you know them to be,” Clark told TheWrap at the series’ red carpet premiere Monday in Los Angeles. “There [is a line] Galadriel speaks at one point about how with wisdom, there is a loss of innocence, and that’s something I really focused on – that she’s got to lose some innocence, she’s got to gain some wisdom to become the lady of Lothlórien that we know her to be.”

The prequel series, which is inspired by the works of JRR Tolkien, using details from his appendices and little details hidden away in the author’s celebrated books they were able to take strings from, will make its debut on Prime Video Sept. 2. The highly-anticipated series will have a two-episode premiere, followed by one new episode a week. Having worked on the show for several years, Clark said she can’t wait for it to be out in the world.

“I’m really excited for my friends and family to see it. Everyone on this show was separated from those that they loved,” she said of the show, which was filmed in New Zealand. “And so for them to see what I was actually up to, I’m really looking forward to.”

The Welsh actress also revealed that playing one of the most famous Elves in the Tolkien prequel required a lot of time in the makeup chair. It was all part of the transformative process to play the younger version of the legendary character.

“Ears, hair, a lot of makeup. The costumes are just out of this world,” she said. “And I really think when you’re playing a fantasy character, a magical character, it’s very hard to imagine you’re them when you’re not in all that regalia. So it was a big part of it and it meant that it was quite a long process getting into costume and makeup. We got to know each other really well, which was nice, too.” 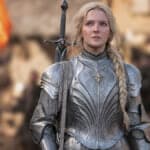