Maya Rudolph on Playing a ‘Vulnerable’ Billionaire in ‘Loot’ 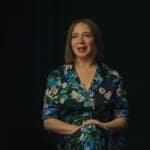 “Loot” co-creators Matt Hubbard and Alan Yang had only one person in mind to star when they created their Apple TV+ comedy about a newly minted female billionaire navigating her tabloid-catnip divorce and venturing to rebrand as a philanthropist: Maya Rudolph. And they were right on the money with the “Saturday Night Live” alum, who plays the obscenely wealthy Molly Novak. Rudolph understands the character beyond her “colorful elements” (also known as her Birkin bags, superyacht and David Chang as her personal chef), seeing her instead as a “vulnerable” woman who must navigate through a “transitional period” in her life, she told TheWrap Monday as she discussed the Season 1 finale.

“I feel like they set Molly up for endless, limitless possibilities, which is, to me, the best spirit of this show and the joy of playing this character,” Rudolph said. “The money gives her the resources to feel like anything is possible, but I think when you pair that with someone having a real life change and really figuring out who they are — getting to know themselves — that is even more of an endless possibility scenario .”

For Rudolph, who had previously joked that she was certain Hubbard and Yang would not make her character out to be a “complete POS,” Molly’s essence is a delicately balanced high-wire act of likability.

“I wanted to try to figure out how to create a character that rode the line of humility and ignorance at the same time — a way to make that likable and someone that you can empathize with because what was important to me was to be able to empathize with the woman that is going through this transitional period in her life,” she said. “And that underneath it all, she is still a vulnerable person who’s going through a very significant life change. When we strip away the layers of the billionaire aspect, and all of the colorful elements, I think what this character is deeply rooted in is soul searching, and I feel like that is such an interesting place to come from.

See also  The cruel story behind 'The problems grow'

“That being said, I personally just can’t help but lean into the comedy — somebody who’s unaware of their surroundings, I personally find that fun to play and so I really wanted to, any chance we got, make sure that we leaned into that because, to me, that’s the icing on the cake,” the “SNL” alum added.

Exhibit A: In the Season 1 finale, which aired last Friday, Molly gave a disastrous presentation for a purportedly miraculous water machine that was said to be able to transform filthy water into clean. When the invention failed, and instead produced an odorous and foul-colored substance, Molly — against everyone’s cries otherwise — decided to drink it anyway.

“It was pretty gross, and I have to say even though I wasn’t drinking actual poop water, the concoction that our prop master so sweetly made for me and made sure that I was OK with was very sweet,” Rudolph said of the experience. “So what ended up happening was I drank quite a bit of it — and if you’ve ever had too much [of] anything sweet — you just feel so sick. So I was genuinely disgusted at a certain point.” 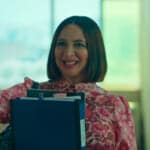 The scene was a trigger point for Molly, who soon after decided to give away her wealth in order to lead a more moral life. It was a natural progression of her understanding of what it means to be incredibly privileged, as she preached to a room full of fellow elites about how billionaires shouldn’t exist. Despite the stride in her professional life, Molly took “one step” back romantically, hooking up with her ex-husband, Ella John (Adam Scott) in the episode.

“It’s like, yeah, two steps forward, one step back,” Rudolph said of the cliffhanger moment. “I think there’s always that inevitable moment where you sleep with your ex — you didn’t mean to, it was a terrible idea, you know it’s a terrible idea but everybody seems to do it at some point. That said, I don’t know what that’s going to bring for her relationship with John because I don’t think it’s a relationship she’ll ever be able to necessarily escape.” 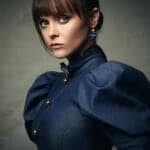