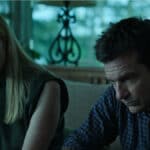 This story about Chris Mundy and his series “Ozark” first appeared in the Down to the Wire: Drama issue of The Wrap’s awards magazine.

After four seasons of weaving and bobbing their way through money laundering, evading the watchful eye of the FBI and keeping a scary Mexican drug cartel’s deadlier impulses at bay — all while maintaining a dinner-on-the-table nuclear family unit — the Byrde family (led by Emmy nominees Jason Bateman and Laura Linney) finally seemed ready to fly the coop in style in the final season of “Ozark.” Or did they? In a recent interview, showrunner Chris Mundy (who is also nominated for best drama and writing) explained. (Spoilers ahead!)

“Ozark” debuted five summers ago, when not many high-profile drama series came out that time of year. Now everyone seems to do it.

I wouldn’t have known what way to bet before that, but it was perfect. Because in Season 1, we set the clock on our season [storyline] from Memorial Day to Labor Day, like “launder this money by the end of the summer or you’re dead!” So it felt good to me.

Did you have an inkling then of what an incredible legacy it would have?

No. I mean, you always hope people will watch, obviously. We were hopeful that we could pull it off just because Jason is so good and Laura is so good. And Julia [Garner, as rival Ruth] was better than we ever could have dreamed. But you never assume that it’s going to get a bunch of attention. We were just kind of hoping to plug away and make our weird little show. 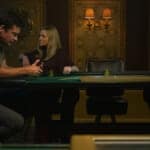 One of the hallmarks of the show is that so many of its actors, and not just the leads, get to completely play against type. Like having the beatific Richard Thomas play a real bad dude.

Alexa Fogel is our casting director and she just has amazing taste and judgment. So some of it was just to find the most talented person and they can do anything. Richard is a good example. He’s such a nice person, and he getting to be an asshole alcoholic father, there’s a real joy in getting to write that. I also remember there was a scene in the Season 2 finale where Laura’s character basically gives Ruth’s father [played by Trevor Long] a bag of money to get out of town and then he gets assassinated. I remember Laura turned to us and said, “I never get to be the person to say, ‘Here’s a bag of money, get out of town!’”

You wrote the final episode, which oddly sparked a lot of online debate about what actually happens. (The Byrde family is threatened with damning evidence by hovering private investigator Mel, when the angsty, teenage Jonah Byrde holds a shotgun in Mel’s direction, followed by a smash cut to black, followed by a gunshot.)

I knew that Ruth’s death would be polarizing for people, because it was polarizing for us in the writer’s room, even though I think it was absolutely the right decision. But I didn’t expect there to be any ambiguity about who Jonah shot in that cut to black. I did n’t expect people to be guessing about who he shot: Did he just shoot the cookie jar or maybe one of his parents from him? For me, it was always really clear: Poor Mel is gone. (laughs) But it’s the fun of it. I do love all the theories.

See also  Inside the Look and Lenses of Severance

“Ozark” is well-known for having a tight-knit, loving cast, creators and crew. Any talk of a Byrde family reunion, as they’re ostensibly all still with us?

There’s no plan at the moment. But at the same time, I don’t think anyone would ever say never. It is definitely a group of people who all like working together.

Read more from the Down to the Wire: Drama issue of TheWrap’s awards magazine here.