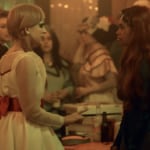 “Pretty Little Liars: Original Sin” is a much more horror-centric take on Sara Shepard’s young adult novels about a group of teenage girls who are being stalked by an anonymous assailant.

While the teen slasher series contains plenty of callbacks to the original series (hello, crazy twin theory), there are also a ton of winks to classic horror films that make the series that much more eerie — from strikingly obvious references like “Carrie” to more subtle references like “The Shining.”

“We’re such die hard horror fans,” co-creator Roberto Aguirre-Sacasa told TheWrap. “I think that’s part of the fun of this show is getting to play with those tropes and doing new versions of those scenes.”

As Season 1 of “Original Sin” comes to an end this week, Aguirre-Sacasa and co-creator Lindsay Calhoon bring broke down some of the best homages to the horror genre throughout the series.

You’d be hard-pressed to have missed the references to “Carrie” throughout the first two episodes of the series. The first nod to the classic horror film is in the opening of the first episode, when a distraught Angela Waters begs her friends from her to help her before jumping from the rafters to her death from her at a Y2K party.

There is an obvious callback to both that scene and its film inspiration in the second episode, when Karen Beasley (Mallory Bechtel) is hiding in the rafters ready to pour red paint on Imogen Adams (Bailee Madison) when she is crowned spirit queen at the Millwood High School dance. However, “A” gets the best of her before she can, pushing Karen out of the rafters and killing her.

See also  Chasing Amy: 5 Ways Comic Book Culture Takes Itself (And Why It Gets Wrong)

“That’s the most overt of them,” Aguirre-Sacasa said of the multiple “Carrie” moments throughout the series.

The 1960 Alfred Hitchcock classic is actually mentioned by name in Episode 4 of the series when Tabby Haworthe (Chandler Kinney) decides to recreate the famous shower scene for her film class. But instead of a straight take on the scene, she decides to use it as a chance to subvert the genre. In Tabby’s version of the scene, female Norman Bates stabs an unassuming man as he takes a shower.

“There was a documentary that was literally only about the shooting of the Alfred Hitchcock ‘Psycho’ shower scene. I watched it, and I was like, ‘Wait. Lindsay, did you ever see that documentary?’ That kind of inspired that little storyline,” Aguirre-Sacasa said. “We’re also students of horror films, so even going back and studying those movies and what they did and how they did it and figuring out how we wanted to celebrate that, but also subvert it and bring it into 2022.”

The co-creators agreed that they took Tabby’s class assignment opportunity to tell more horror stories — which are predominantly told by male filmmakers — from a “female point of view.”

“Having a character like Tabby, a female director, being able to sort of write through her and tell stories through her really helps us flip that gaze through the show,” Bring said. 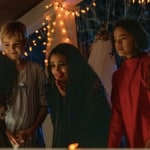 You may have missed this moment in Episode 3, which is not a direct reference at all, but more so inspired by the Steven Spielberg thriller. While the school sits in the auditorium and listens to a eulogy about Karen, “A” looms under the bleachers directly under the Liars. He reaches for Imogen’s legs from her, but she gets up and rushes out of the auditorium just in time.

“You might not think ‘Jaws’ and ‘Pretty Little Liars,’ but I think in our writers’ room we were pitching on an amazing horror moment for Episode 3 and the idea came up, ‘What about ‘Jaws’ in an auditorium? ‘” Bring said. “So, that moment is so scary and amazing, but again inspired by a horror property that we love, just subverted and done in a very different way.”

Again, these two films don’t receive an overt mention in the series, but rather the entire Adams household is loosely inspired by both films. You might remember the scene in Episode 1, where Imogen and Karen walk down the hallway to the bathroom, only to discover Imogen’s mom dead in the bathtub.

“That long, red hallway — we call it ‘the horror hallway,’” Aguirre-Sacasa said. “It’s like it was straight out of a horror movie. I remember the first time my husband saw dailies, he was like ‘Oh that hallway is so red.’ And I’m like, ‘Yeah, it’s a horror movie hallway.’”

The bathroom and the hallways reappear in several more moments throughout the series, including when “A” kills Tyler during the Halloween party in Episode 5. The eeriness of the bathroom is somewhat influenced by “It,” which is infamous for its creepy bathroom scenes (think: blood spewing out of the sink).

“Even in little details, it was like, ‘What’s the horror movie version?’” Aguirre-Sacasa said. 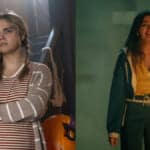