‘Rogue One: A Star Wars Story’ Heads Back to Theaters in Imax With Advance ‘Andor’ Footage 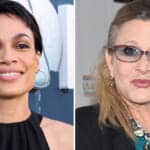 “Rogue One: A Star Wars Story” is headed back to Imax theaters this month — six years after the film’s initial release. But this time, it’ll come with a first look at Disney and Lucasfilm’s next streaming series, the “Rogue One” prequel “Andor.”

“Rogue One” tells the story of just how the rebellion came into possession of the Empire’s plans for the Death Star in “Star Wars Episode IV: A New Hope,” thanks to two rebels known as Jyn Erso (Felicity Jones) and Cassian Andor (Diego Moon). The film, released in 2016, has in more than $1 billion at the worldwide box office.

And while “Rogue One” is a prequel to the Skywalker saga, the new streaming series “Andor” will serve as a prequel to the prequel. The series takes place five years before the events of “Rogue One,” when the rebellion is just starting to form. At that point, Cassian Andor wasn’t necessarily the man who was willing to give up his life for future generations.

The advance footage from “Andor” shown in these screenings “offers audiences a look at the story, which explores a new perspective from the ‘Star Wars’ galaxy” and “brings forward the tale of the burgeoning rebellion against the Empire and how people and planets became involved.”

Showings of “Rogue One,” along with the “Andor” preview footage, will take place in 150 Imax theaters across the US and Canada for one week beginning on August 26, ahead of the premiere of the first three episodes of the Diego Luna- led prequel series on September 21.

See also  Loop Hero: How to find and complete missions