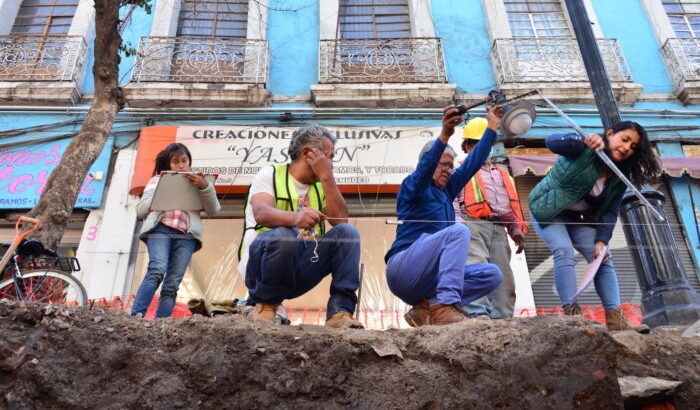 The archaeological rescue team of the National Institute of Anthropology and History (INAH) discovered a wall that would correspond to a perimeter fence, a work that was possibly carried out by a council of Mexico City between the 17th and 18th centuries.

The experts accompany the drainage replacement works that are carried out in the Lagunilla road stream, next to the Guelatao Social and Sports Center, in the Historic Center.

The exposed wall in Ignacio Comonfort street it has a length of almost eight meters in length and a width of 75 centimeters, with coarser characteristics than the one located weeks ago, which indicates that this fence had modifications over time. 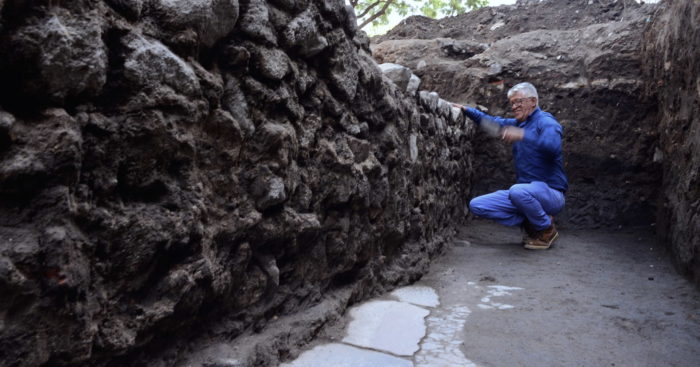 The group of experts, coordinated by the archaeologist Juan Carlos Equihua Manrique, explained that From its connection with República de Honduras street, about 30 meters of this perimeter wall have been registered, although there are no transversal walls that allow delimiting the land that it flanked. 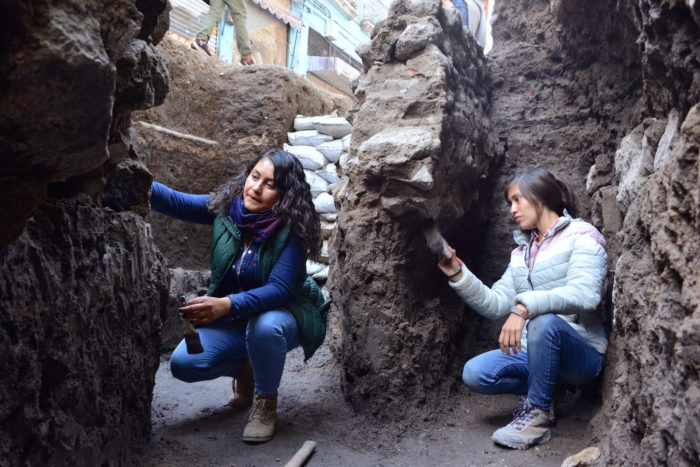 “The section of wall we just explored on the north side of the excavation corresponds to a modification of the original fence, which they broke at some point and was later rebuilt. It is worth mentioning that both sections of the wall start at different levels, the south wall starts much lower”. 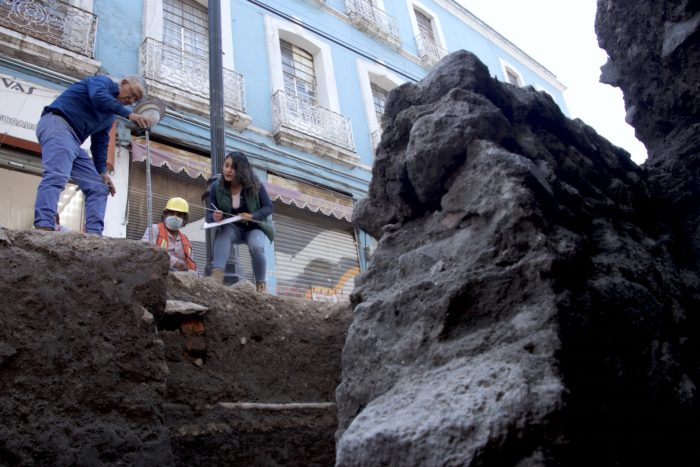 The specialist adds: “The changes in this constructive element are evident, since the manufacture and quality of the materials is different, here (on the north side) we have many uncared stones and with remains of sand-based plasters with tepetate and lime, while the original wall had cared stones, a clay mortar, as well as stucco and a couple of quarry entrances that were closed”, details the researcher from the INAH Archaeological Salvage Directorate (DSA). 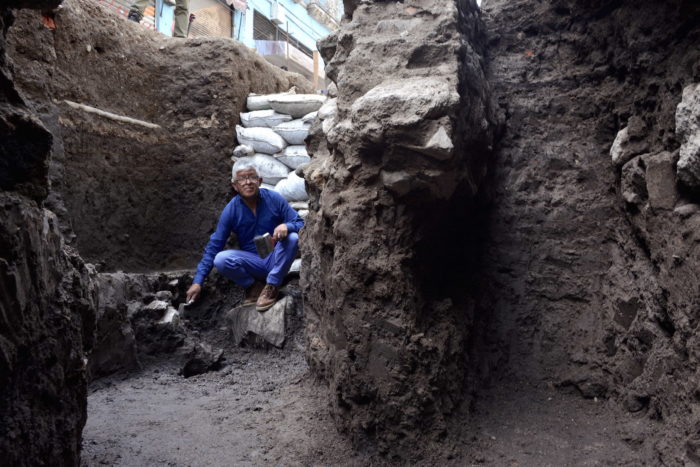 Associated with the wall segment newly explored, ceramic materials such as pateras or lebrillos were recovered on its inner face, whose use was extended in the city of New Spain between the 16th and 18th centuries.

meanwhile, adjoining On its exterior face, a floor of slabs from pre-Hispanic times was found. (1 meter wide by 2 meters long), which could correspond to a patio. 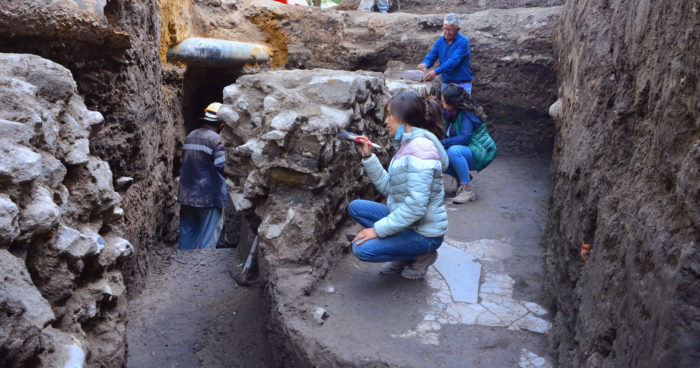 Juan Carlos Equihua said that It was disconcerting to find this floor from the Late Postclassic (1350-1519 AD) only 1.20 meters deep, when in the southern part of the excavation, where 20 meters of the original wall were exposed, evidence of the transition between the pre-Hispanic and colonial periods were 2.50 meters below the surface.

Now, Equihua Manrique points out, the big question is to know what construction was limited by this great wall, so it will be necessary to investigate historical archives and have the advice of specialists such as Clementina Battcock, who has delved into the history of the Mexica neighborhood of Cuepopan-Tlaquechiuhca, a border area where the Tenochcas fought wars with their Tlatelolca neighbors. 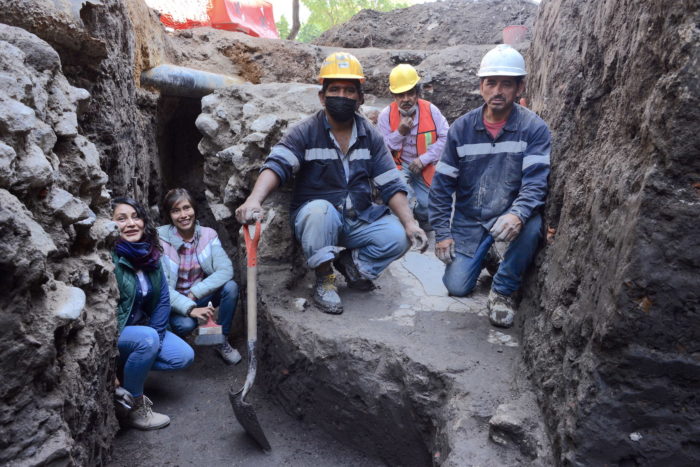 In addition, according to the architectural testimonies and materials recovered from Ignacio Comonfort Street, this peripheral area remained occupied immediately after the fall of Tenochtitlanalready under the European construction parameters, but facing the drawbacks of an unstable, muddy terrain, which required various modifications, as can be seen in the slope that surrounds the perimeter wall. 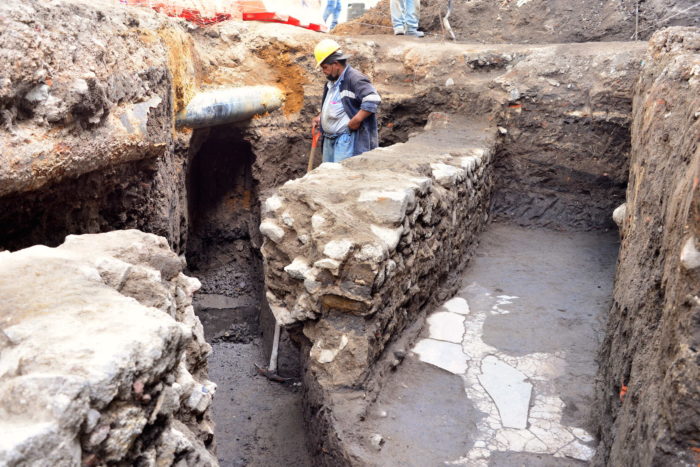 in follow up to the work carried out by the Ministry of Works and Services (Sobse) and the Mexico City Water System (Sacmex), on República de Nicaragua street, near the Santa Catarina Parish, a small section of a Novohispanic drainage was recorded based on quarry slabs, basalt walls and covers of 1.40 meters long. 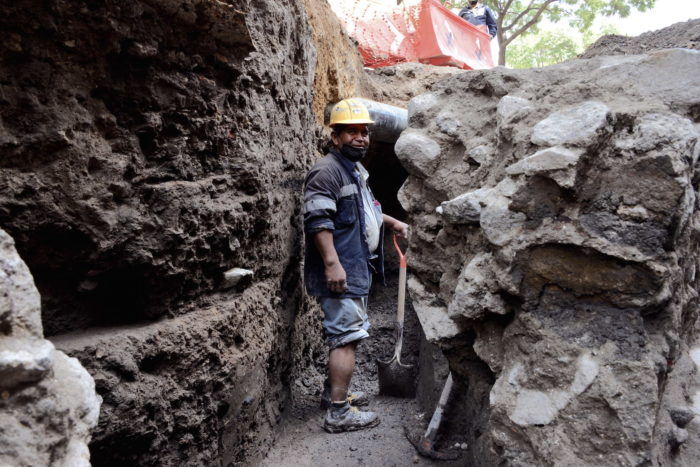 The archaeological team composed of Claudia Nicolás Careta, Norma Edith Aguirre Lemus, Ariadna Valencia Torres and Tulio Hernández Cordero It will remain in the La Lagunilla industrial estate until November 30, and afterwards, it will focus on the analysis of the recovered materials, an arduous task, since there are more than 400 bags with ceramic fragments and figurines, lithics and worked bone.