10 Best Shows Like The Lord of the Rings: The Rings of Power 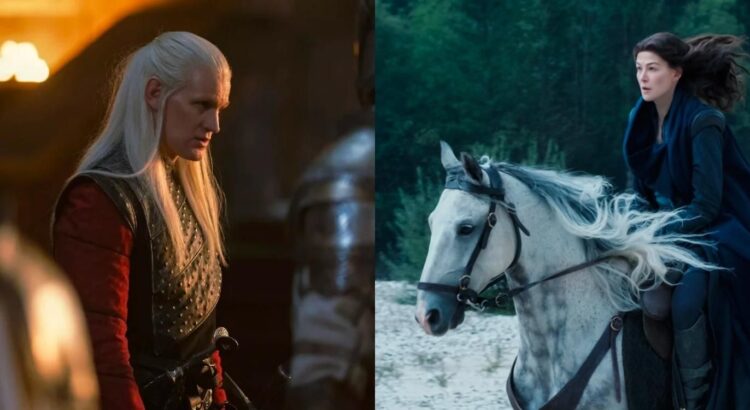 premiere of The Lord of the Rings: The Rings of Power will mark yet another extraordinary chapter in the ongoing golden age of fantasy television. With its enormous budget, its sprawling story, and its evocation of one of the most well-established and beloved mythologies in fantasy literature, it is certain to be a benchmark against which other series are measured.

However, while it is in many ways a unique series, there are also a number of other fantasy and science fiction series with which it shares a great deal in common and which are therefore worth a watch.

The Wheel of Time has quickly established itself as one of the best series on Prime Video. With a sprawling story and a cast of lovable characters who embark on an epic quest, it is very much in the same Tolkien tradition as The Rings of Power.

What’s more, it also involves a cosmic battle between the forces of good and evil, both of whom are fighting for dominance of the world. With two seasons already having been greenlit, this is definitely a fantasy series in which viewers are invited to totally lose themselves.

There are many great original Netflix series, and The Witcher should certainly be seen as one of these. Though a bit bleaker and more cynical than Tolkien’s work, it nevertheless has much to recommend it to fans of The Rings of Power.

Of particular note is the hero Geralt of Rivia, the character of the title and a man with his own stubborn sense of honor and a moral code he follows. It also features a very powerful female character in Princess Cirilla, who will be sure to appeal to those who enjoy the presence of Galadriel in the Tolkien-inspired series.

game of Thrones is unquestionably one of HBO’s best TV series. Though very much in the epic fantasy tradition, it is also about the nature of power and just how far people will go as they pursue more of it.

With its dragons and its many noble houses competing for power, it has a vast scale that is sure to make it appeal to fans of The Rings of Power. It also shows the power of fantasy as a genre to ask pertinent questions about the real world, how it works, and why people behave the way they do.

Of all the fantasy series that have appeared over the last decade, The Shannara Chronicles has the most in common with the original Tolkien, in large part because of its source material, the series written by Terry Brooks.

Over its two seasons, it follows several reluctant heroes as they battle against various evils, including both demons and a malevolent entity known as the Warlock Lord. Though its narrative could be a bit messy at times, there’s no doubt that it was an ambitious piece of television and a compelling adventure story in its own right.

As a spinoff prequel of game of Thrones, House of the Dragon has a lot to prove, but already it has shown that it is willing to take its own path. Focusing on the royal Targaryens as their dynasty begins to fracture, it is a brooding, atmospheric series that explores the halls of royal power and its misuse.

It has much to recommend to those who enjoy The Rings of Power. In particular, it focuses on a world that is poised on the brink of a great change, one which will leave almost no one unscathed and unscarred.

As a genre, fantasy has the power to ask tough philosophical and ethical questions, and this is particularly true of Tolkien. It is also true of Philip Pullman, whose magisterial trilogy known as His Dark Materials is the basis for the HBO series of the name.

It focuses on two young people, Lyra and Will, as they struggle against a theocratic organization known as the Magisterium, which would bring all creation under its brutal sway. Beautiful and haunting and tragic, it has just the right mix of fantasy elements to make it sure to appeal to those who love Tolkien and its on-screen adaptations.

Though it is still a rather young show, Foundation has already shown that it is one of the best series on Apple TV+. With its story about an empire that is poised to collapse, and the efforts of a group of scholars to protect valuable knowledge for generations to come, it is exactly the sort of vast storytelling that is sure to appeal to fans of Tolkien and Middle-earth more generally.

Though the plot can, at times, be a bit slow-moving, it is one of those series that only gets better the longer it goes on.

Netflix has joined the world of epic fantasy television in a big way, and this is very much in evidence in the series Shadow and Bone. Like so much of Tolkien’s work, this is very much an epic, focusing on Alina Starkov, an extraordinary young woman with a powerful gift that could very well reshape her world.

Like all the best fantasy, the series focuses not only on Alina’s hero’s journey but also on the larger ethical and philosophical questions she has to face as she finds herself drawn further and further into a conflict very much larger than herself.

very quickly, The Legend of Vox Machina has established itself as one of the best animated series of 2022. Focusing on the adventures of the titular group of mercenaries, it has a fiery and irreverent sense of humor that marks it as different from many other fantasy series.

Still, there is much here to recommend it to fans of The Rings of Power, particularly since it is clear how much the series owes to Tolkien and his world-building. This is, indeed, a world in which the viewer can lose themselves for hours.

Neil Gaiman is one of the most visionary authors working in fantasy, and his graphic novel The Sandman remains one of his most loved works. The Netflix adaptation is remarkably faithful to his vision of him, and it focuses on the character of Morpheus, the ruler of the Dreaming.

It has all the meticulous world-building a fan of The Rings of Power could ask for, as well as sumptuous designs and glittering CGI. It is, altogether, a beautiful, haunting, and deeply thoughtful fantasy series, and a reminder of just how much potential there is in fantasy adaptation.

See also  The extension to regularize the 'chocolate cars' is negative: AMDA | Video