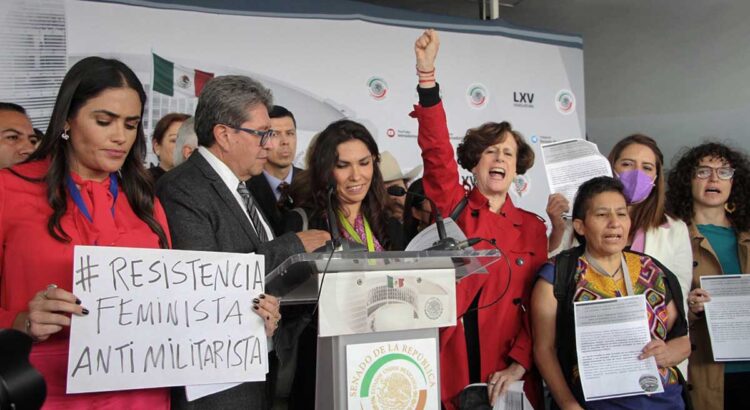 The collective ‘Antimilitarist Feminist Resistance’ spoke out against the initiative of President Andrés Manuel López Obrador, which gives the Secretary of National Defense (Sedena) control of the National Guard (GN).

A group of women, representatives of the collective formed by more than 440 organizations, broke into the Senate facilities on Wednesday afternoon, while the Morenoite parliamentary coordinator, Ricardo Monreal Avila, gave a press conference on the subject.

After an exchange in the corridors of the Senate, Monreal Ávila opened the microphone to the group, whose representative Paola Zavala read a message to ask that the Morenoite senators and other parties reject “the militarization of the country.”

The group criticized that the deputies approved the reforms to the National Guard, without a “deep discussion”.

“The modifications include concentrating the budget, territorial presence, training and specialization of said institution in the Sedena, which annuls the civil nature of the authority in charge of ensuring citizen security in Mexico”they pointed out.

“The Armed Forces are not trained with a focus on citizen security, and their military strategies do not reduce violence nor have they managed to dismantle the organized crime networks in collusion with the State,” they said, while citing the decisions of the Inter-American Court of Human Rights (IACHR) that public security and the maintenance of order should be reserved to the civil forces.

They pointed out that militarization affects public security and hinders access to justice; it particularly affects historically oppressed groups; generates opacity, lack of transparency and lack of effective accountability, among other considerations.

Therefore, they made an urgent appeal to the senators to vote against and do not violate the Constitution, nor approve laws or militaristic reforms that violate life, integrity and security.

President López Obrador was asked to stop your militarist policy and review the public safety strategy. “A war strategy that continues a failed war cannot generate a context of peace,” they said.

To the Supreme Court of Justice of the Nation (SCJN) They demanded that he immediately resolve the actions of unconstitutionality, constitutional controversies and pending amparos in terms of militarization: “The country deserves an effective control body that defends the Constitution and international treaties on human rights.”

Together they asked the Executive, Legislative and Judicial powers to give priority to the construction of peace from a perspective of violence prevention and crime with an intersectional and restorative perspective at the federal, state and municipal levels.

“The production and reproduction of violence, conflict and death through a military strategy are not solutions. Transinclusive, anti-racist, anti-punitivist and anti-militarist feminists, as well as the victims and relatives of victims of serious human rights violations, stand up for life, peace and justice. We demand a security policy with a human rights approach, with clear controls, accountability mechanisms and guarantees in favor of the civilian population”, they concluded.

The feminists also delivered their document to Morena’s general secretary, Senator Citlalli Hernandezwith whom they had a brief exchange.