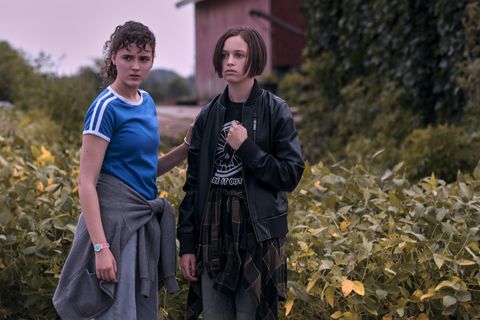 Amazon Prime has canceled ‘Paper Girls’one of the best fantasy series on Amazon Prime Video, after a single season.

The series, based on graphic novel by Brian K. Vaughan and Cliff Chiang, premiered in july with a first season of eight episodes. Despite being based on the graphic novel by the also author of ‘Y, the last man’, the ‘Paper Girls’ series showed substantial changes with respect to the comic.

‘Paper Girls’ is a sci-fi drama about a group of 12-year-old newspaper delivery girls -Erin (Riley Lai Nelet), Mac (Sofia Rosinsky), Tiffany (Camryn Jones) and KJ (Fina Strazza)- who go out to make their route in the early hours of Halloween 1988 and, without knowing it, they travel in time until the year 2019.

Searching for a way back home, they get caught up in a time-skip fight, come face to face with “their adult selves” and try to save the world all at the same time.

Despite the good reviews received after its premiereand that the soundtrack of ‘Paper Girls’ is a timeless hit that has dazzled its followers, the medium dead line reports that the series did not manage to sneak into the weekly ranking of Nielsen streaming platforms, the American audience measurement system, so fans will not have another season.

However, all hopes have not been lost, as is being offered to other platforms to try and continue the ‘Paper Girls’ storythe series that mixes ‘Stranger Things’ and ‘Doctor Who’.

Following the premiere, series director Chris C. Rogers discussed plans for a second season and how the shocking ending of the first season – here’s the bizarre ending of ‘Paper Girls’ season 1, explained – has set things up for future episodes.

“We also wanted this to go from small to big in the sense that at the end of this series, there’s a fucking dinosaur, do you know what I mean?” he said at the 2022 San Diego Comic-Con.

“We’re going to the cathedral, we’re leaving these terrestrial environments and signaling that the series is going to open up and go into a broader scope in the pure sense of entertainment.”

See also  In Mexico, more Covid-19 positive patients could benefit from Paxlovid if it were not an emergency biologic: Dr. Moreno | find out