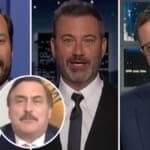 Florida Governor Ron DeSantis recently had two plans filled with migrants flown to Martha Vineyard, and “Late Show” host Stephen Colbert had plenty to say about the political stunt pulled by the politician.

Colbert had plenty of jokes about DeSantis’ decision – which the governor recently claimed was because Florida isn’t a “sanctuary state.” But the late night host’s first one addressed the beauty of the location the migrants were flown to.

“Hey, Ron, if you’re trying to discourage immigration, maybe don’t send people to one of the loveliest parts of New England, just in time for leaf peeping season,” Colbert quipped.

He continued: “Of course DeSantis wasn’t sending these folks to the Vineyard to have a good time. He was human trafficking these families as a political stunt. Just like it says on the Statue of Liberty. ‘Give us your tired, your poor, your huddled masses yearning to – psych! You just got liber-t’d.’”

To further make his point, Colbert brought up the news that Florida officials are reported to have told the migrants they were being taken to Boston.

“In fact, Florida officials lied to these people and told them they were going to Boston, and they didn’t tell Massachusetts officials that the plans were coming. But local residents responded [and] the town state representative tweeted, ‘Our island jumped into action putting together 50 beds, giving everyone a good meal, providing a play area for the children, making sure people have the health care and support they need. We are a community that comes together to support immigrants,’” he said. “Yes, DeSantis owned those libs by making them look compassionate.”

As he began to wrap up that portion of his monologue, Colbert suggested Florida spend its money on preparing for the effects of climate change.

“Of course DeSantis’ hate stunt don’t come cheap. This year, the state of Florida’s budget for this kind of stuff is $12 million. You know, maybe with global warming and all, I’m gonna say Florida should be spending that money on something more useful – like snorkels. Or waterproof meth. For the Gators. It’s for the gators. Don’t come between a gator and his meth.”