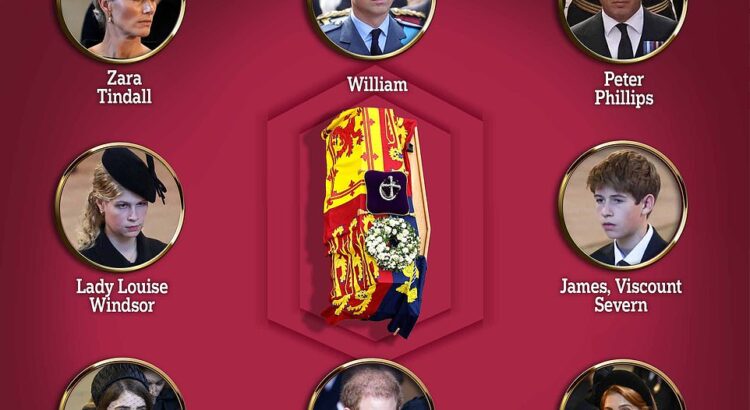 William and Harry will stand at the head and foot of the Queen’s coffin in a special vigil on Saturday night with all eight of the monarch’s grandchildren.

The Duke of Sussex will wear a military uniform – which he didn’t during Wednesday’s funeral procession from Buckingham Palace to Westminster Hall – at King Charles III’s request during the 15-minute ceremony.

It is considered the latest reconciliation move between the King and his son, whose relationship has become strained since Harry quit as a working royal.

Spouses such as the Princess of Wales, Meghan Markle and Mike Tindall will not attend the vigil, where the other six grandchildren will be in Morning Coat and Dark Formal Dress with Decorations.

The relatives will stand in quiet contemplation around their grandmother for a quarter of an hour as a mark of respect – something they were all keen to undertake, sources say. Their parents are doing the same this evening. 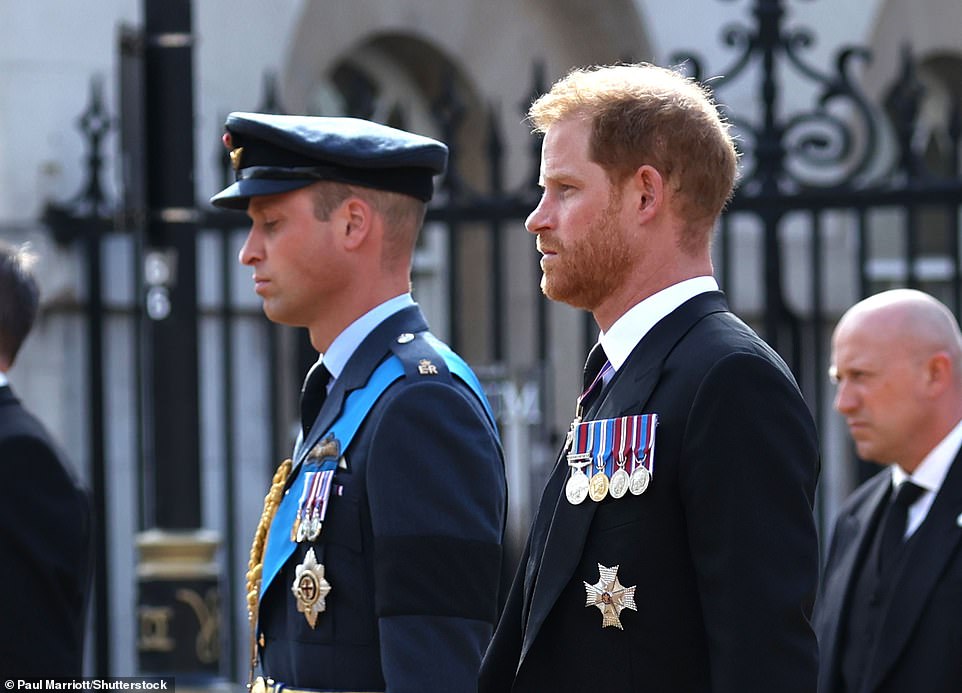 William and Harry at the procession in central London on Wednesday. The Duke of Sussex will wear his military uniform at Saturday’s vigil 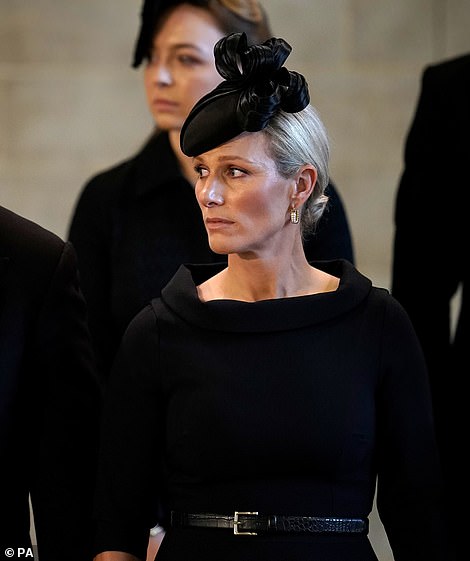 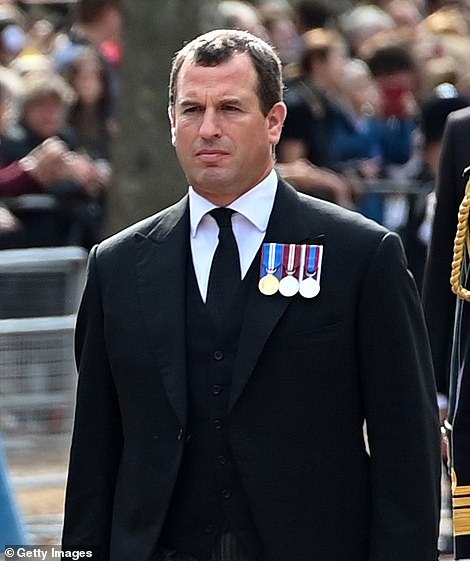 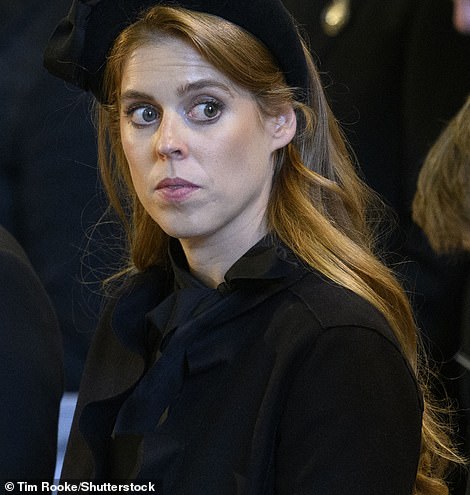 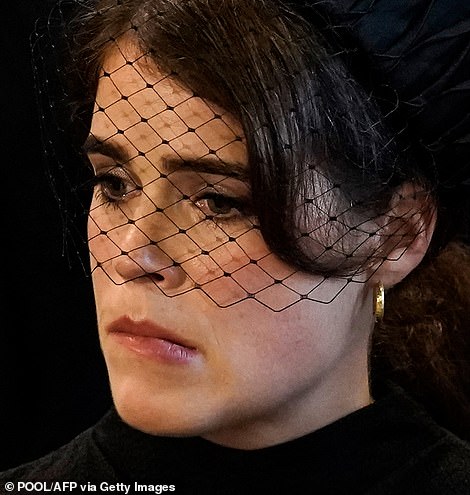 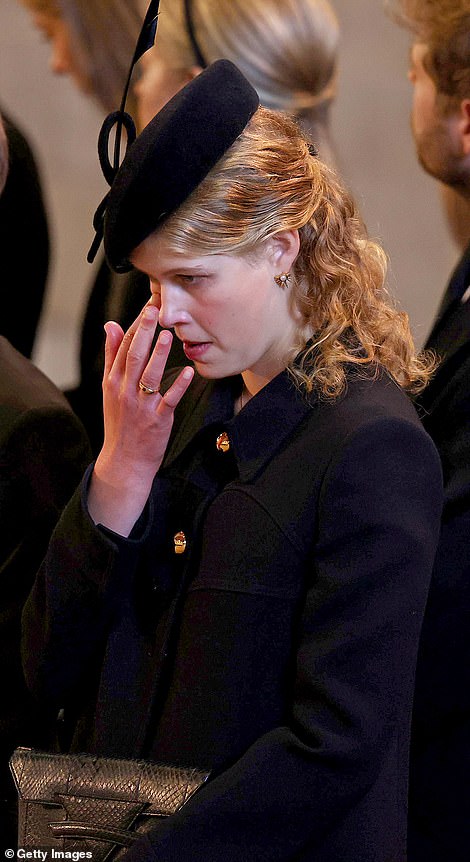 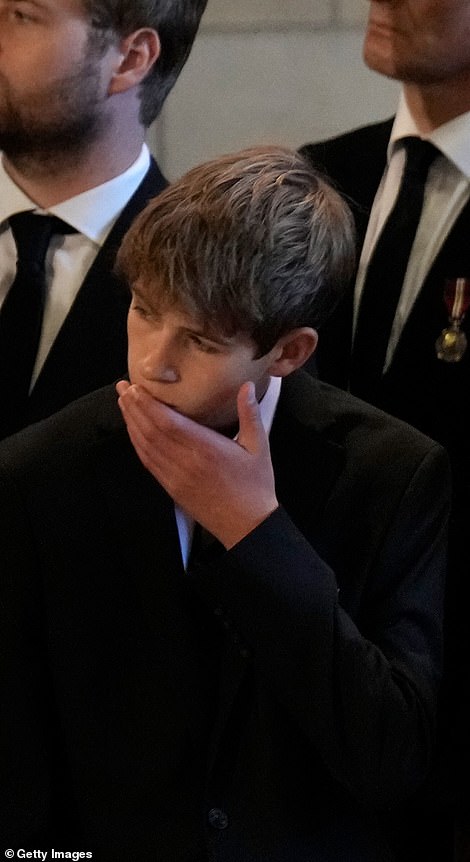 Lady Louise Windsor (left) and James, Viscount Severn (right) pay their respects in The Palace of Westminster during the procession for the Lying-in State of Queen Elizabeth II

Prince Harry has so far been unable to wear a military uniform during any of his public appearances following the Queen’s death.

That is because, when he stepped back as a royal front line in the wake of Megxit, he was stripped of his military patronages.

Prince Harry, who served in the British army for a decade including two tours of Afghanistan, has so far worn a morning suit with military medals to public events.

Prince Andrew, who also stepped back frontline royal duties in the wake of the Jeffrey Epstein sex scandal, is set to be given a special dispensation to wear his colors on Friday night, when the Queen’s four children will hold another vigil.

He will join King Charles, Princess Anne and Prince Edward in standing guard, having also done so at St Giles’ Cathedral in Edinburgh earlier this week.

The exception was made for the Duke of York to wear a uniform for the vigil at Westminster Hall as a ‘final mark of respect’ for his mother.

He is expected to wear the full military dress uniform of a Vice Admiral of the Navy – the only military rank that he still holds.

The senior royals are expected to replicate the ceremonial act they performed in Edinburgh, where they ‘took guard’ of their late mother’s coffin for 10 minutes.

Each stood on one of the four corners of the oak coffin with their heads bowed as part of the royal court known as the ‘Vigil of the Princes’. It was the first time the tradition has taken place since 2002.

That vigil was attended by the royal’s four grandsons – King Charles, Prince Andrew, Prince Edward, and the Earl of Snowdon.

The initial suggestion that Prince Andrew could wear a military uniform, while Harry’s ban was maintained, had led to criticism from some quarters, while the Duke of Sussex himself released a pointed statement addressing the issue, saying his decade of service was ‘not determined by the uniform he wears’.

Speculation mounted earlier this week that Harry would be allowed to wear his uniform, with royal sources claiming ‘common sense has prevailed. 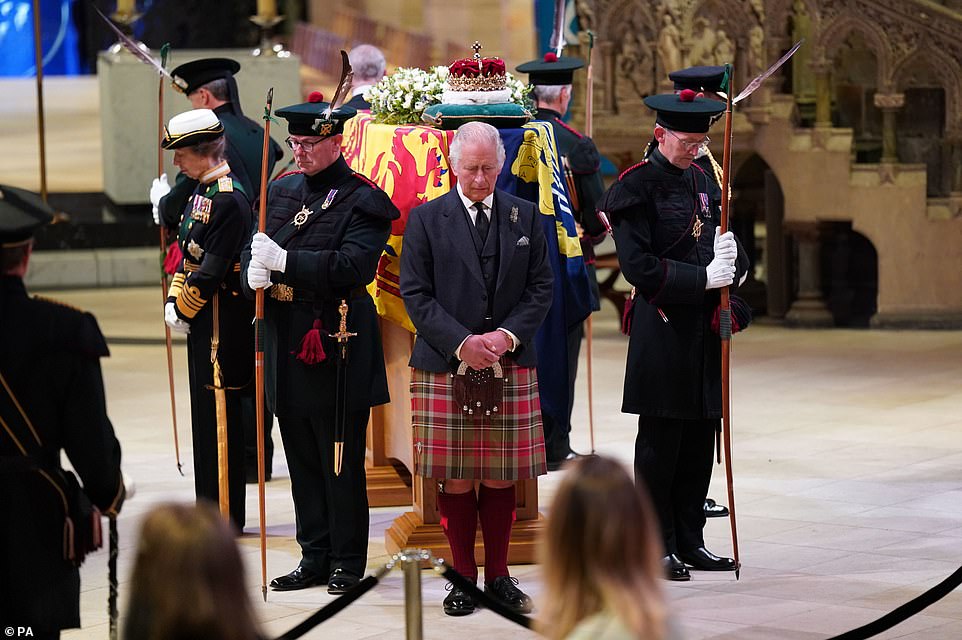 King Charles III, Anne, the Princess Royal, Prince Andrew and Prince Edward each stood on one of the four corners of the coffin in a ceremony known as the ‘Vigil of the Princes’ as the Queen lay in St Giles’ Cathedral, Edinburgh, earlier this week 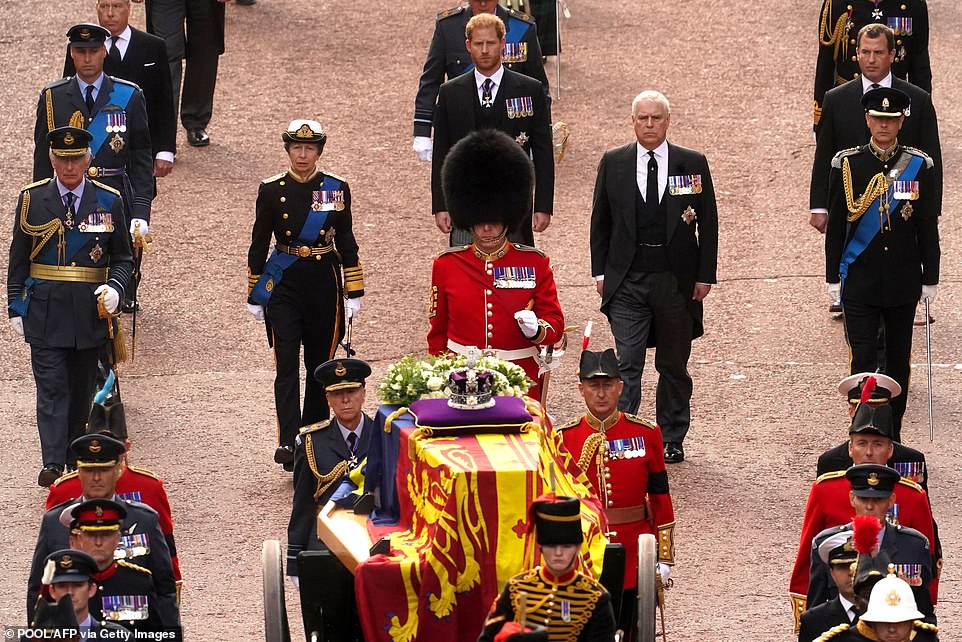 King Charles III (furthest left) will symbolically lead the final ceremony honoring the late Queen Elizabeth II, and will be joined by his siblings, the Princess Royal, the Duke of York and the Earl of Wessex who will all play central roles in the historic ‘Vigil of the Princes’

It is understood that the ban on Prince Andrew wearing military uniform, which has seen him opt for a morning suit for public appearances this week (above in Buckingham Palace), will be lifted as an exception for the final vigil. He lost that right after the Queen stripped him of his honorary military titles and royal patronages in January 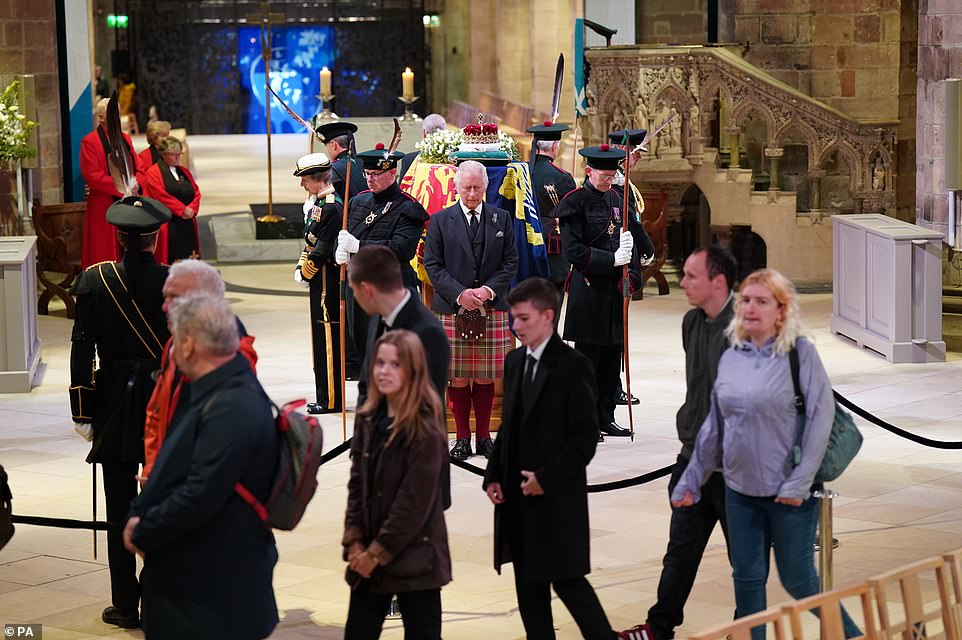 Members of the public – who filed past the coffin in their thousands – were briefly held back to allow the royals to take their place. However, they continued to file past once the vigil began, offering them an extraordinary perspective on the historic moment in Edinburgh. 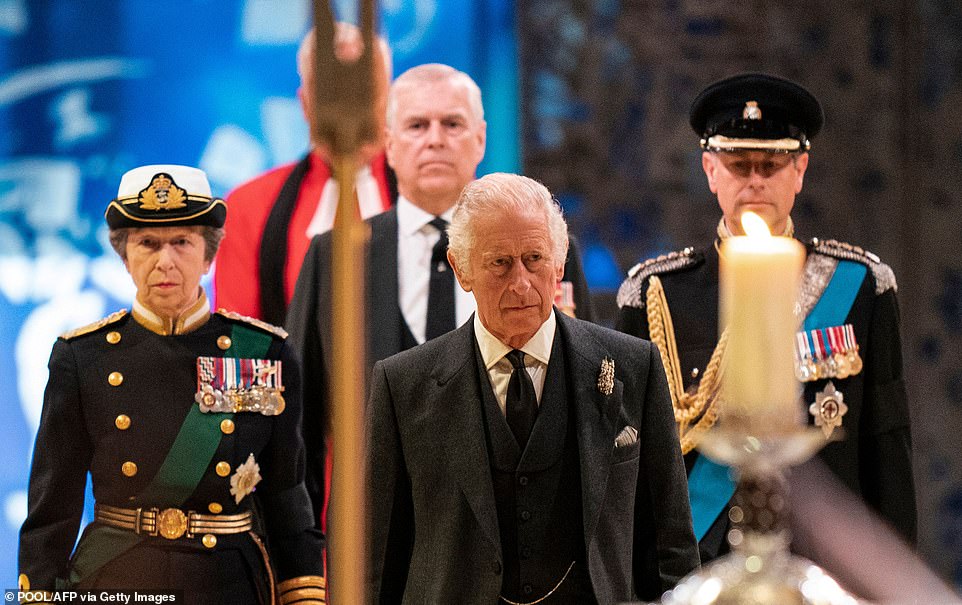 Harry and his brother William will also walk together in the procession of the Queen’s funeral, as they continue to put their feud aside out of respect for the late monarch.

For the second time in less than a week, the warring siblings will march side-by-side, this time in Monday’s short funeral procession from Westminster Hall to nearby Westminster Abbey.

The brothers have, up until last week, barely been seen together in public since the Duke of Sussex’s acrimonious departure from frontline royal duties in February 2020.

But following the Queen’s death, the siblings appear to have enacted a truce, culminating in a walkabout outside Windsor Castle last week with wives Kate and Meghan.

They walked together during Wednesday’s procession of the Queen’s coffin from Buckingham Palace to Westminster Hall – a sharp contrast to Prince Philip’s funeral last April, when the siblings were separated by Princess Anne’s eldest, Peter Phillips.

At Monday’s funeral, the Duke of Sussex will be flanked by his older brother, the newly titled Prince of Wales, and Mr Phillips, as the coffin makes the short journey – led by Navy troops pulling a gun carriage.

The three eldest grandchildren of the Queen will walk behind King Charles, Princess Anne, Prince Andrew and Prince Edward, who will lead the procession of senior royals behind the late monarch’s coffin.

Behind the grandchildren will be the late monarch’s son-in-law Vice Admiral Sir Timothy Laurence, the Queen’s cousin the Duke of Gloucester, and her nephew the Earl of Snowdon.

It comes as it was earlier revealed how the Queen’s state funeral will end with a two-minute national silence in a ‘fitting tribute to an extraordinary reign’ before she is laid to rest beside her late husband.

The Queen: All you need to know following her passing and a look back at her 70-year reign