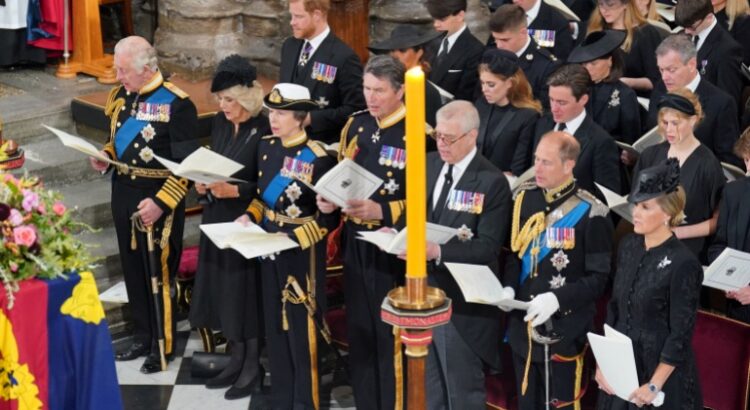 Queen Elizabeth II has been laid to rest after a state funeral attended by world leaders and a final journey through the streets of London.

Monday’s funeral comes 11 days after the longest-serving monarch in British history died aged 96 at Balmoral Castle in Scotland on September 8.

Thousands of people lined the streets surrounding Westminster Abbey and Buckingham Palace to witness the passage of the queen’s casket from Westminster Hall to the church and eventually to Windsor Castle, where she was laid to rest alongside her late husband, Prince Philip and her father, King George VI.

Millions watched the funeral on television at home after a public holiday was declared to mark the passing of the queen.

In the lead-up to the funeral, many people across the country camped out and queued for upwards of 13 hours to visit the queen’s coffin in Westminster Hall and pay their respects.

On Monday, Westminster Abbey’s tenor bell tolled 96 times at one-minute intervals – one for every year of her life – stopping before the service started at 10:00 GMT to mark the only monarch most Britons have ever known.

The oak coffin was covered with the Royal Standard flag, the queen’s colours, with the Imperial State Crown on top, placed on a gun carriage and pulled by naval personnel to Westminster Abbey, where Queen Elizabeth was married in 1947 and crowned queen in 1953.

Among 2,000 people in the congregation, there were about 500 world leaders, including US President Joe Biden, Emperor Naruhito of Japan and South African President Cyril Ramphosa.

“All the people of the United Kingdom: our hearts go out to you, and you were fortunate to have had her for 70 years; we all were. The world is better for her,” Biden said after signing a book of condolence.

The funeral, which lasted for under an hour, closed with the Last Post trumpet salute and the national anthem, God Save the King, welcoming the transition from one reign to the other.

“It was incredibly moving; I don’t think anyone couldn’t be touched by it,” said Al Jazeera’s Nick Clark, reporting from Westminster Abbey.

King Charles led mourners and 6,000 members of the armed forces who had marched the coffin to the royal hear, alongside his three siblings, his heir, Prince William, and his younger son Prince Harry, from Westminster Abbey to Wellington Arch.

In the afternoon, people lined the route, throwing flowers, cheering and clapping as the hear traveled the 32km (20 miles) from London to Windsor – from the city to the countryside that Queen Elizabeth had loved throughout her life.

“For the queen and her family, it [Windsor Castle] was where she spent much of World War II, during the blitz and the German bombs falling on London,” said Al Jazeera’s Rory Challands, reporting from Windsor.

“It was a big part of her life, a big part of the royal family’s life, and of course, the British monarchy’s history going back many, many centuries,” he said.

During the ceremony, the crown, orb and scepter – all symbols of the monarch’s power and sovereignty – were removed from the coffin and placed on the altar.

Once the royal items were removed, Lord Chamberlain Andrew Parker, the most senior official in the royal household, broke his “wand of office” to place it on the casket, signifying the end of his service to the queen.

The queen was lowered into the royal vault of St. George’s Chapel at Windsor Castle. A private family service will follow later on Monday at the chapel that will see the queen interred next to her late husband de ella.

The start of a new era

The queen’s death has prompted reflection on the country she ruled over and the legacy of its past, its present state and what the future might hold for the United Kingdom under a new reign.

The funeral was “a huge resonant moment in history for British people to look back on and look forward to as well”, said Al Jazeera’s Nadim Baba, reporting from Buckingham Palace.