‘La pack’, by Andrés Ramírez Pulido, another twist to the origin of violence 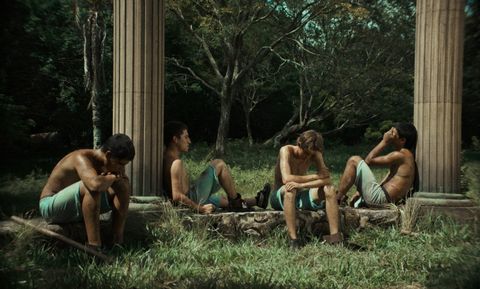 Andrés Ramírez Pulido premieres his first feature film, under the same themes that his two previous shorts addressed, ‘El Edén’ (2016) and ‘Damiana’ (2017): the role of the father, due to his absence in broken families or emotional abandonment, and the birth or explosion of violence between adolescents, without family references, left to themselves in the middle of the Colombian jungle.

The power of Colombian cinema is on display at the San Sebastián festival, by adding ‘The Kings of the World’, by Laura Mora, to its Official Section. Another great Colombian filmmaker who, with her debut feature ‘Matar a Jesús’, swept festivals around the world. Film closely linked by its history with ‘La pack’. If in that the murder of the protagonist’s father was central to the story, in this same circumstance she will play a very important role.

The beginning of the film already places us, from the first image, in a context that promises tragedy. Young people drugged, drunk and with a knife in their hands (Chejov already announced it: “one should never put a loaded rifle on stage if it is not going to be used. It is wrong to make promises that you do not intend to keep”), Ramírez Pulido fulfills his promises, in spades. Subtly, with an imaginative use of ellipses, the filmmaker immediately transports us to a jungle that could be one of the Dantean circles.

A strange place, in the middle of nowhere, is home to some teenagers, with no idea where they are. Like the spectator, the protagonists suffer from a real uneasiness in front of their ‘monitors’. One of them, convinced of the possible redemption of these young criminals with relaxation and prayer tactics, and the other, much older school, convinced of the impossible rehabilitation and willing to use the historical methods of violence, intimidation and aggressiveness.

The filmmaker has been working for years with natural actors (one of the trends in current auteur cinema), in proposals that use cinema as an educational instrument. The choice of the protagonist is one of the best in the film (Jhojan Jiménez, who plays Eliú, a young man who is torn between assimilating what happened or finishing what he started) crosses the big screen with his impressive presence.

The mastery with which Ramírez Pulido makes the crudest realism dialogue with the lyricism of the images is overwhelming. One of the locations of the story, a kind of platonic cave where the most lurid criminal acts are reconstructed and, at the same time, the most beautiful images of the film, transports us to an indeterminate timeless space.

An imaginary, close to the Thai filmmaker, Apichatpong Weerasethakul, surrounded by an impeccable soundtrack, that of Pierre Desprats (regular creator of the entire sound set for Bertrand Mandico). A moment in which the viewer questions whether this violence will ever end or how to mitigate its consequences on the young generations.

A film that fascinated the jury of the last edition of the Cannes festival, where it received the Grand Prix and the SACD award from its parallel section dedicated to new talents, and it would not be surprising if it ended up with a prize (with the permission of the Costa Rican ‘I have electric dreams’, which may turn out to be the final surprise on the list of winners).

See also  Through a meeting with Viggiano, Morena asks the TEPJF magistrate not to vote on the election of Hidalgo

Synopsis: Eliú, a country boy, is imprisoned in an experimental center for minors in the heart of the Colombian rainforest, for a crime he committed with his friend El Mono. Every day, teenagers engage in strenuous physical labor and intense group therapy. One day, El Mono is transferred to the same center and brings with him a past from which Eliú tries to flee.