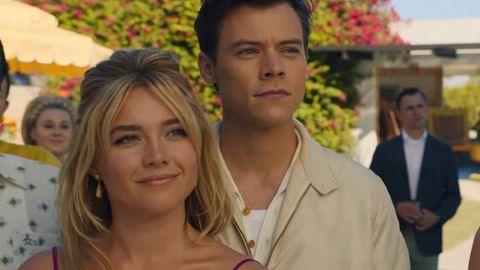 Olivia Wilde has been the protagonist of one of the soap operas (sadly, not fictitious) last year. Everything was happening around her new film as a director, ‘Don’t worry, dear’. After a few months full of assumptions, anger, hidden plots and alleged spitting, the actress and filmmaker sat on the sofa in the Late Show by Stephen Colten, on CBS, and has shed light on some of the intricacies that have fed twitter and the media, during the last weeks.

Colten himself knew what he was up against. Despite being an interview focused on promoting the theatrical release of ‘Don’t worry, dear’, after her time at the Venice Festival, and her visit to the San Sebastian Festival; all his eyes and ears were focused on knowing firsthand how much truth there was in the gossip of the summer.

The first thing that was put on the table was the incident with Shia Lebouf, and the media brawl in which he claimed to have abandoned the project, after Wilde claimed that he had been fired. “Once it was clear that there was no sustainable employment relationship, I received an ultimatum,” Wilde explained to the presenter. “I chose my actress, and I’m so glad I did. Did it bother me that we couldn’t get it to work? Yes. Did I get other information about him later, which made me sure that I had made the right decision? Absolutely.“

After this, they went to next item on the list. Harry Styles’ famous “spit” on Chris Pineduring the premiere in Venice. This matter has already been clarified by Chris’s representative, who denied the viral story. Even Styles himself joked that he spat on Pine at one of his recent concerts at Madison Square Garden.

The actress began to speak on the subject saying: “Another one of our weird rumours, which you’ve probably heard of, is…” To which Colbert quickly interrupted her, making it clear that he already had that question prepared. And he read: “Did Harry Styles spit on Chris Pine? Why or why not? Justify your answer.” Wilde, laughing, replied: “No, he did not do it. But I think it’s a perfect example of how people search for dramas anywhere they can. Harry didn’t spit on Chris, in fact…” The presenter cut her off again to joke: “Only time will tell…”

Finally, the star issue came to light. The conversation drifted to try the personal relationship between Wilde and the film’s protagonist, Florence Pugh. This has undoubtedly been one of the most notorious, due to the apparent distance of the actress towards the film during its promotion. Even in Venice, Olivia Wilde and Florence Pugh kept their distance. On this, the director was clear: “I feel nothing but respect for Florence’s talent,” he was saying to Colbert. “Is fantastic. He’s on the set of ‘Dune’ now, and there’s nothing else cool what a busy actress. I have nothing against her, in any way.”

In addition, he took the opportunity to reflect on how no man directing would be exposed to this type of scrutiny on his relationship with the cast.

“People would be talking about his movie only,” he commented. “They are praised for being tyrants. They can be investigated over and over again, and that doesn’t overshadow conversations about their talent or their movies. It is something that we have come to accept. They are simply two different standards that have been created for women and men in the world.”

‘Don’t worry dear’ opens in theaters on September 23, in Spain.