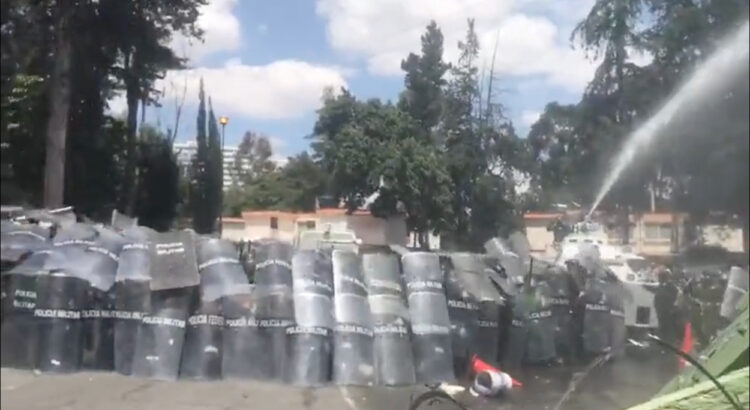 This Friday afternoon, the mexico city transit it is affected by four major mobilizations that are taking place simultaneously.

In the south of the capital, at the height of Churubusco River and University Avenuesince the morning street vendors who were removed from the area by the opening of the commercial complex Mitikahbegan to carry out intermittent blockades in the area.

In addition, the neighbors Xoco town that have been affected by the construction of the 67-story tower and a shopping center, closed the main accesses to the commercial complex after 3:00 p.m., due to the fact that it has caused them a lack of water, an increase in the cost of property taxes due to the work and lack of access to enter their town. The side of Río Churubusco in the direction of Revolución is closed, and Universidad Avenue is also affected.

If you go to the movie theater and see Mitikah makes you angry, if you are a victim of real estate power, if you oppose the forced displacement of the people of Xoco, it doesn’t matter where you’re from, don’t let the inauguration be a party. all together
Against Merchandise City #WeDefendTerritoriesOfLife pic.twitter.com/biVm65Lbv7

More towards the center of the city, on the edge of the neighborhoods Roma and Condesa, affiliated to the Single Union of Notimex Workers (SutNotimex) who have been on strike for 946 days, closed Insurgentes at the height of the Chilpancingo Metro, demanding that their labor rights be respected and that the federal government fulfill its promises of dialogue, given the closure of the agency’s authorities.

In the northern part of the capital, there are two large demonstrations that cause road problems.

On the one hand, students from the Higher School of Medicine blocked from noon this Friday Interior Circuit at the height of the Casco de Santo Tomáscenter and side lanes in both directions,
to demand more budget for its school campus, a change in school management and better study conditions.
In addition, they demand better study conditions and more budget for education; subsequently, dozens of young people walked to the Center for Scientific and Technological Studies (CecyT) 12, waiting for the authorities of the National Polytechnic Institute to attend to their demands.

Finally, in Periférico Norte, at the height of Lomas de Sotelo where Military Camp 1 is located, normalista students from Ayotzinapa, parents of the 43 students who have disappeared for 8 years, and activists who accompany them, are holding a rally to demand that the students be found alive and that members of the Mexican Army who may be involved in the crime be punished. kidnapping and disappearance of the young normalistas.

In this place there have been clashes between the demonstrators and elements of the Military Police that guard the facilities, due to the fact that the former have thrown firecrackers into the military field, while the latter have resorted to the use of water jets to try to disperse civilians, including press workers who are documenting the event.