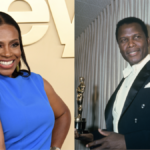 Thursday’s episode of “The Late Show With Stephen Colbert” kicked off with a gag about the new conservative dating app, The Right Stuff, that imagines how brutal the prospects for single people really would be on such a service.

If you’re just catching up, “The Right Stuff” was created by three former Trump officials and is backed by right wing billionaire Peter Thiel. If you visit the site, which launched this month, it is of course chock full of the tired, tiresome culture war trolling conservatives deploy on social media — other dating services are “woke” and have “pronouns” and are full of people “offended by everything,” blah blah blah. Read more about it here.

Anyway, as always the cold open began with a news supercut explaining the matter, then came the gag, a fake commercial that begins with repurposed footage from a real The Right Stuff ad, featuring Ryan McEnany (sister of ex-Trump spokesperson Kayleigh McEnany) .

“The right stuff is all about getting into the right dating pool with people who share the same values ​​and beliefs as you. It’s easy,” the ad promises. “Just scroll through all the eligible conservatives.”

Then came the parody.

“Like Rudy,” the ad continued, showing a picture of Rudy Giuliani. “He believes in family values, and he proved it by marrying his cousin of him.”

“Ted,” the ad went on — and yes, it’s a photo of Ted Cruz. “You wo n’t need birth control, because the ex-president took his balls from him.”

“Don Jr. He loves fresh powder. And he skis!” the ad promises. We probably don’t have to tell you what that’s about, right?

“Matt,” the ad says, as a photo of Florida congressman Matt Gaetz is shown. “Oops, he’s not on this app. I have dates on Venmo.” Again, we probably don’t need to explain that joke.

“Download The Right Stuff today,” the fake ad concludes. “And have your heart stolen, just like we pretended the election was.”

You can watch the clip above. But a note to Colbert’s writers: We know that they never mention Donald Trump’s name on purpose, but IRL conservatives would never refer to him as “the ex-president.” Anyway, as we said, watch it above.