How to Watch Barbarian: Is the Horror Movie Streaming? 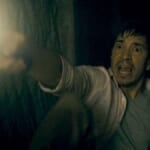 Every once in a while, a horror movie comes out of nowhere to become something you just “have to see” — at least, within the horror community. In 2021, it was James Wan’s “Malignant,” and now in 2022 it’s quickly becoming “Barbarian,” the 20th Century Studios horror film that has been building buzz in the weeks since it first hit theaters. Most of those raving about the movie say you want to know as little as possible going in, but how about where you can watch it? All your questions answered below.

Is “Barbarian” Streaming or in Theaters?

“Barbarian” is currently playing exclusively in theaters. The film opened on Sept. 9, and the only way to see it currently is by going to a movie theater.

So When Will “Barbarian” Be Streaming?

Soon enough! Since this is a 20th Century Studios release, it’s expected that the film will be streaming on both Hulu and HBO Max 45 days after its theatrical release. That would put its streaming release date around Oct. 24 – just in time for Halloween!

Given the R-rating, it’s unclear if/when it will be streaming on Disney+, although the family friendly streaming service does now include a number of R-rated titles.

What Is “Barbarian” About?

In the interest of keeping things spoiler-free we’re gonna go as bare bones as possible here, but the story follows a young woman who books a rental home while traveling to Detroit for a job interview. But when she shows up, she realizes the house has been double-booked and there’s a strange man already staying there. The film was written and directed by Zach Cregger.

Who Is in the “Barbarian” Cast?