In NY, Ebrard proposes a complementary diplomatic channel in the face of ‘paralysis of the Security Council’ | Video 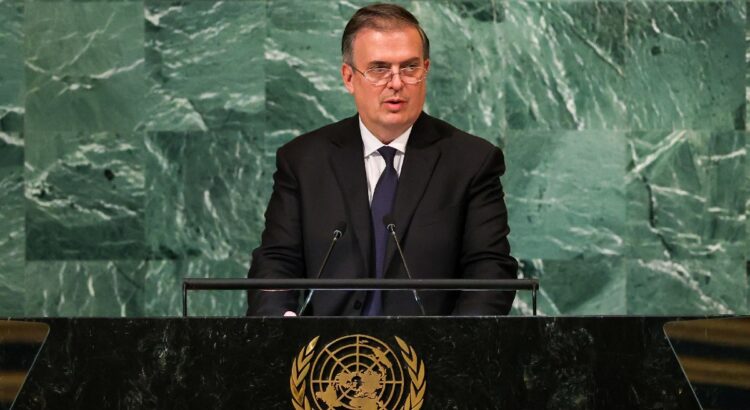 During his participation in the ninth plenary session of the General Assembly of the United Nations (UN), the Mexican Foreign Minister Marcelo Ebrard reiterated the lack of action and resolution of the Security Council before the Russia-Ukraine conflict“one of the most serious crises in recent years”.

“The Security Council, it must be said, it has not been able to fulfill the mandate conferred on it by the Charter of the United Nationshaving failed to prevent the war, nor take the measures to put a stop to the armed aggression, much less, has managed to direct any diplomatic process to seek a solution by the path of dialogue and negotiationEbrard said.

Among the failures of the organization, the Mexican foreign minister also highlighted that he has not been able to get all the provision of humanitarian assistance required in the face of growing need.

“Based on his pacifist vocationMexico believes that the international community must now channel its best efforts to achieve peace,” the Mexican foreign minister said at the time.

Before the Assembly, Ebrard insisted on the Mexican proposal and explained that it would consist of a delegation or Caucus of Heads of State and Government that encourages and accompanies the efforts of the secretary general, to promote measures to foster the confidence that is now lost between the Russian Federation and Ukraine that make it possible to create the conditions, as soon as possible, to bring the parties closer to the mechanisms for the peaceful settlement of disputes established in the Charter of the United Nations.

“In other words, given the paralysis of the Security Council, we must all offer a complementary diplomatic channel to the existing ones to interact with the parties in conflict, with a view to reducing tensions and channeling the indispensable mediation.”

He also highlighted what in almost two years, Mexico, as an elected member of the Security Council, has done with the aim of delving into the structural causes of conflicts, and promoting preventive diplomacy, as a central element for maintaining international peace and security.

He assured that they have brought to the discussion table topics that had been “set aside” such as poverty, corruption and inequality as underlying factors of the conflict, mental health as an unavoidable objective of the humanitarian aidthe notions of masculinities to prevent radicalization and terrorism, the importance of respecting the collective security system established in the Charter.

“The paralysis of the Security Council resulting from the abuse of the so-called right of veto by some of its permanent membersEven during this Assembly, two of them explicitly referred to the need to restrict its use to truly exceptional situations”, he added.