‘Monster: The Jeffrey Dahmer Story’ Gives a Voice to the Victims, Not the Killer 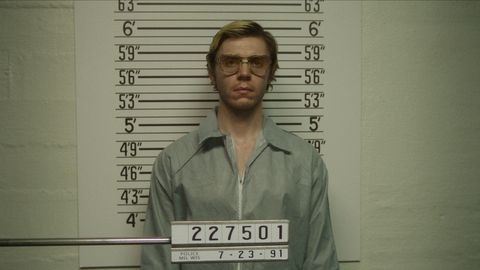 Ryan Murphy and Evan Peters they have experience in working together showing disturbing characters, as they have already demonstrated in several seasons of ‘American Horror Story’ as showrunner and protagonist, respectively. ‘Monster: The Jeffrey Dahmer Story’, the new 10-part Netflix series about the serial killer known as the Milwaukee Butcher, is no exception.

However, both actor and screenwriter were clear that they did not want to participate in the macabre morbidity of the audience that idolizes this type of bloodthirsty criminalthe main reason for the rise of true crime documentaries on streaming platforms, but they wanted to show respect for their victims at all times by telling the story from their point of view and denouncing the racist and homophobic errors of the authorities of the time, which made it easier for the murderer to lengthen his list of corpses.

Between 1978 and 1991, Dahmer murdered and dismembered 17 men and boys, most of them black. The intention of Murphy and Ian Brennan’s series is to project the voices of their victims and highlight the racial injustices that allowed the killer to continue killing with impunity. Since Konerak Sinthasomphone, a 14-year-old boy who escaped disoriented from Dahmer’s apartment and was escorted back to him to his terrible end by the police themselveswho saw nothing suspicious, until the multiple alerts raised by the neighbor of the Milwaukee Butcher, Glenda Cleveland, which were ignored time and time again by law enforcement officers.

In an interview published in Twitter by the producer of Ryan Murphy, the actor Evan Peters recalls that “we had a rule from Ryan that it would never be told from Dahmer’s point of view. As an audience, you don’t really like him. You’re not really getting into his situation. It’s called ‘The Jeffrey Dahmer Story,’ but it’s not just about him and his backstory. are the repercussions Peters said. “I felt it was important to be respectful to the victims, to the families of the victims. Try to tell the story as authentically as possible.”

Rashad Robinsonpresident of the association Color of Change who participated as an advisor on the series, adds that the series “is about the chilling impact on the community as a whole and all the ways in which the police, the Milwaukee authorities, the media and many others in society were complicit”.

“I wanted to impose the humanity of these victims and their familiesRobinson said. “I wanted to make sure that we as viewers really understood how a situation like this plays out, not just through the eyes. [de Dahmer]otherwise through the eyes of people who had their own hopes, aspirations and dreams.”