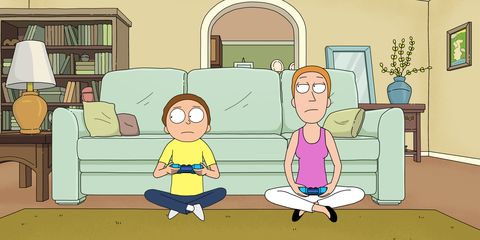 Spoilers for ‘Rick and Morty’ Season 6 below!

However, season 5 may have taken this too far with the episode: ‘Giant Incestuous Baby’. The concept itself is probably not the most extreme idea this series has ever had, but there was nothing sensible that made sense of the title. It was only and exclusively something grotesque and grim.

Then, a few weeks later, the seventh episode of season 5, titled ‘Gotron Jerrysis Rickvangelion’, doubled down on this with the return of Naruto, Morty, and Summer’s Giant Incestuous Baby.

It’s too much, especially when you combine all that with the “C-137cest” community. Oh, aren’t you a member? Well, they are basically an online community that is obsessed with the theory that Rick and Morty must be making out in some corner of the multiverse. Because everything is possible within the multiverse, right?

There are many works of art and fan fiction disturbers circling the internet. If you are curious and fancy learning more about this “C-137cest” phenomenon, may your history rest in peace after doing so.

Taking all of that into account, ‘Rick and Morty’s’ relationship with incest is only rivaled by ‘Game of Thrones’ and ‘House of the Dragon’s’ obsession with intra-family love. So, With great daring we face the last episode of ‘Rick and Morty’, where the “Beth of space” and the “Beth of Earth” are closer than ever…

Yes that’s how it is. Rick’s two clone daughters have a different connection in this third episode of season six, which sounds gimmicky in advance. Only for that, you’d understandably assume that ‘Rick and Morty’ is playing around with incest again, just because.

But that would not be fair, because “Bethic Twinstinct” is much more than that. Not only is it the best episode of the season, it’s probably the best Beth episode we’ve seen since “The ABCs of Beth” in Season 3.

The story begins innocently enough, except for the part where Jerry says he would kill himself if Beth ever left him. Something very typical of Jerry, and that he reminds us that Beth has felt trapped for a long time by this man. It’s not uncommon to understand that she’ll only be able to find solace in another version of herself, one that knows Beth better than anyone else.

As we found out a few years ago in Beth’s first episode, she is more like Rick than you might imagine. So now, the only way for her to survive is to suppress those dark and cruel aspects of herself. But that’s not all she is. Beth is also caring in many ways, and even though she might not win a mother of the year award, here or anywhere else in the multiverse, she will always be there for her family.

This claustrophobic existence is stifling for Beth, even as her father and sons go exploring and leave her behind at home with Jerry. It seems like no one really understands her, or the trauma Rick has put her through. Except the “Beth from space”, of course.

“The Beth of Space” is the carefree and independent version of herself. That Beth that she has always wanted to be, and most importantly, she has not had to change to become it. She, clone or no clone, is living the life Beth has long dreamed of, and now she’s literally within her grasp.

Of course, there’s a chance Rick’s special wine acts as a catalyst for their attraction, but this runs deeper than any sci-fi chemical. Too much pent up pain blocks it. Is it so weird to understand that she falls in love with a version of herself, the one she wants so much to reach?

Both Beths are aware that their love can be considered a strange form of narcissism., (just like when Rick hooked up with his own stunt double). But it is not a mere form of self-love, in this case. It is a way of validating them both. Despite Rick’s machinations, they deserve to be loved and celebrated in their own right.

It is a passionate love too. This is where that grotesque incest part hits the hardest. But there is always a background of tenderness that makes BethBeth – now we call this I ship – is more believable than any romance seen before in the series.

Plus, Didn’t we celebrate when Loki and Sylvie teamed up in ‘Loki’? Well, maybe not all of us did, to be fair. But that was because their relationship fell into that outdated and misogynistic treatment that Marvel employs so often. Here, ‘Rick and Morty’ draws a much more believable romance, which gives us a real and fundamental vision of Beth.

And, more in its favour, it is far removed from the gratuitous sexual scene between niece and uncle that takes place in Westeros in ‘The House of the Dragon’, did Rhaenyra and Daemon have sex? We are still looking for explanations.

Going back to ‘Rick and Morty’, the rest of the Sanchez family is pretty freaked out by all of this (everyone except Rick). But at the end of the day, Jerry runs off to kiss another version of himself, and Morty and Summer have their Giant Incestuous Baby, so there are plenty of hypocrites here, right?

“Bethic Twin Instinct” might be a little weak relative to the jokes we’re used to, but it’s okay if the script is that good, especially considering that “Rick and Morty” isn’t historically known for being great. in this.

So, grab a glass of Venus wine and join us in toasting BethBeth, the strangest, yet most endearing take on incest — or self-love, whatever that is — we’ve seen on our screens, all year. .