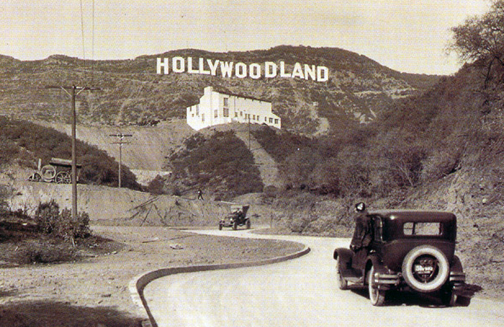 The famous ‘Hollywood’ sign It inspires fantasies and fairy tales, but all is not rosy at the iconic site, which began as an advertisement.

For its 100th anniversary, the sign that dominates the city of Los Angeles is undergoing a facelift, with each of the huge letters receiving a fresh coat of paint.

The last time you painted nine letter sign on top of Mount Lee was 10 years ago and it needs to be renewed approximately every decade.

The current set of letters is actually the third sign erected atop Mount Lee over the years. The first sign, which said ‘Hollywoodland’was erected in 1923, according to the Hollywood Chamber of Commercewhich helps run the place along with the City of Los Angeles and the Hollywood Sign Trust.

Originally intended as a publicitary estrategy to sell land of a new development in Los Angelesthe ‘Hollywood’ sign was longer as it had the word ‘Land’ at the end.

It was planned that the ad lasted only a year and a half however, it ended up becoming an emblem of the city of Los Angeles and of the film industry in the era of the big movie studios, so in 1949 the sign was changed to ‘Hollywood’, which is how it remains until now.

The sign also has a dark side, because in 1932 it was the scene of the suicide of Peg Entwistle a young actress from New York who, unable to break into the film industry, climbed the letter ‘H’ and jumped into the void.

See also  How to delete apps on an Apple Watch

“People don’t realize that when you’re standing in front of the sign, each letter is about 14 meters high, the length of each letter. But they’re also about 10 to 15 feet off the ground,” said Jeff Zarrinnam, president of the Hollywood Sign Trust.

Approximately 1,510 liters of paint and a special antioxidant mixture will be used in the work. Due to the height of each letter, painting the emblem of the city of Los Angeles is not without risk for workers.