‘To the books and to the women I sing’, by María Elorza, debut feature with taste of Proust’s Magdalena 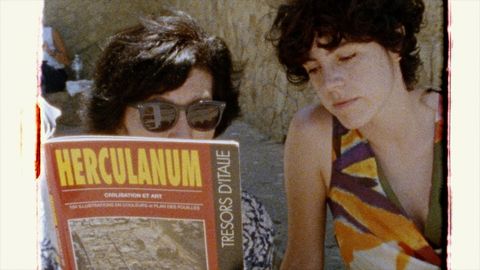 We have reached the final stretch of the 70th edition of the San Sebastián festival with surprises until the last minute. If the Official Selection has been developed with a medium-high level in which nothing has disappointed, we should not forget to point out the magnificent selection of New Directors. A very high level of creativity with the most varied, imaginative and interesting proposals.

The Swiss filmmaker Carmen Jaquier claimed in ‘Foudre’ freedom in feminine, wherever her protagonist is, even if it is a religious order. The French Jeanne Aslan, in co-direction with Paul Saintillan, introduced us to the unforgettable ‘Fifi’, with a more than savvy young girl in the decisive summer of her life. And from Canada, Luis De Filippis welcomed us into the most endearing family of the festival with ‘Something You Said Last Night’, a home where you go from smiles to tears in a matter of seconds. Three solar and unforgettable first films.

With his first feature film, ‘To the books and to the women I sing’, María Elorza has raised the bar even higher for those who believe that the cinema is the place for all possible. Only with the visual intelligence, the sense of narration and the virtuosity of a creative montage that this Basque filmmaker possesses, can it be possible to speak to the seventh art from the least cinematographic, literature.

Based on quotes, film excerpts, transparencies, overprints, music, captured images, animation and all unimaginable resources, the filmmaker fanns the flame of the immense love that her family professes for books and libraries.

In a ‘very short’ narration, he warns us about the murderous intentions of Dante’s books (especially if it is the volume dedicated to Hell), about how to prepare literary outfits or why a volcano cannot burn all the memories acquired by the reading. The alternative to the name of Plane for your daughter, the readings of the tobacco companies or love as an intercultural concept…

María Elorza embarks us on a wonderful and dreamy journey, accompanied by some wonderful women, through colorful chapters and a lot, a lot of cinema. A debut film as tasty as it is literary and with an exquisite taste of Proust’s Madeleine. Women who read are not dangerous. They are essential.

Synopsis: A woman was almost called Plane. Another had a library in the backseat of her car. Another breaks her finger on the unruly shelves of her bookstore. The cigar makers listen to readings while they work. Ironers remember poems. To all of them, I sing. Against fire, water, moth, dust, ignorance and fanaticism, an anonymous army of women takes care of the books. It is an intimate resistance, without epic, without revolution, without weapons.