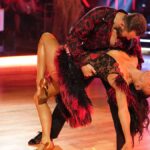 Joseph Baena will have a new partner on Monday’s “Dancing with the Stars” after his current pro, Daniella Karagach tested positive for COVID.

As previously reported by TheWrap, the Disney+ “Dancing With the Stars” production was hit with multiple cases of COVID-19 following its Season 31 debut last Monday.

“Over the course of five days, there were a total of four Covid positives among more than 300 production employees,” a spokesperson for the show said in a statement to TheWrap last Friday. “All four individuals work in completely different departments that do not have in-person contact with each other, based on our pod system.”

“Contact tracing was immediately conducted,” the statement continued. “All close contacts were notified and put on an increased testing cadence. No close contact of the four positive production employees has since tested positive. The entire set has been disinfected. As an extra precaution, we asked the majority of employees to work from home.”