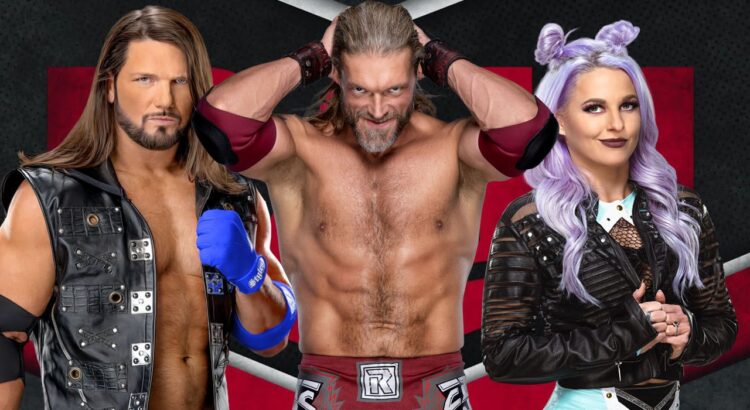 This week’s Monday Night Raw took place in Edmonton, Alberta, Canada and it was going to feature a number of matches promoted before the program. Rey Mysterio was set to take on Seth Rollins, Iyo Sky battled Bianca Belair, AJ Styles went up against Sami Zayn, Kevin Owens teamed with Johnny Gargano to take on Alpha Academy, and Riddle battled Damian Priest in the main event.

This was a night of solid wrestling action and the Edmonton crowd appreciated what they were watching, with some of their Canadian favorites getting their love the most. The big moment was the return of Edge and the debut of Candice LeRae, but there was solid action in between.

Social media lit up with up reviews for the opening match of the night and rightfully so. Belair vs. Sky was strong enough to be a pay-per-view match and the two women were given a good 20 minutes to show their stuff. Belair got the win with a Kiss Of Death finisher but Sky looked strong in the loss. Outside of this being a solid match to open the show. The WWE Universe learned that Bayley and Belair would be having a Ladder Match at Extreme Rules.

Another lengthy match offered another fun contest. Seth Rollins and Rey Mysterio had history and while WWE did talk about it a little, this match felt freak considering the current storyline going on with Judgment Day. Dominik came down to the ring to watch and he played a factor in the finish.

Dom dared his father to fit him with a chair and while Rey stopped and refused to do so, Rhea Ripley attacked from behind and sent him into the post. Dom threw him back in where Rollins delivered a Stomp and then a Peruvian Neck Tie for the submission. It was a subtle but effective call out to Riddle ahead of their Fight Pit Match at Extreme Rules.

On the announce desk was another QR code. One also flashed on the screen during the Rollins and Mysterio match. It led to another White Rabbit video that featured a number of past and present WWE Superstars. Again, the message was “Who Killed the World?” with the answer “You Did”.

WWE is really going hard on this and it appears they’ll be dragging out the reveal for whatever this is. Having nothing to debut is a bit of a disappointment and the longer this lasts, the bigger this needs to be. WWE needs to follow through on this. The hype is unbelievable.

WWE went three-for-three out of the gate with their in-ring action on Monday. The crowd was clearly behind fellow-Canadian Kevin Owens and he gave them reason to cheer and he threw caution to the wind sending himself through a table to take out Otis. That left Gargano to deal with Chad Gable and even though Gable has some help from Austin Theory, Gargano was able to avoid an issue and hit a top-rope DDT for the win.

The first half of the show was filled with strong matches and this one might have been the best. The action was fast-paced, there was a mix of technical wrestling, strength, and high spots.

Winner: Omos Piles Up His Victims

In what was likely a match to make up for the fact there were technical difficulties during his match last week, Omos got another match against two local enhancements and destroyed them in a handicap match. When he was done, he piled their bodies onto the Raw announce table and stiffened over them, appreciating the damage he caused.

This was a basic squash match but it worked. Interestingly, MVP mentioned Braun Strowman’s name while on guest commentary. Is WWE working toward a program featuring those two?

The Miz sent out Miz Force to hunt down Dexter Lumis. Instead, all The Miz found was Lumis dressed like an Edmonton Oilers hockey player and posing as a mannequin until he took out The Miz, then put him to sleep. This repeated toying with The Miz is fun, but it’s not been five or six weeks of the same. It’s time WWE take the next step with this rivalry. This needs to go somewhere.

Candice LeRae made her main roster debut and return to WWE against Nikki ASH It wasn’t a long match, but a lot happened here. LeRae debuted and Nikki tore her mask off her after the bout, suggesting she’s giving up on the almost superhero gimmick.

As good of a match as fans might expect AJ Styles and Sami Zayn woukd have, they did. This went back and forth until Solo Sikoa got involved and delivered a slam to the ring apron on Styles. That allowed Sami to hit a Helluva Kick and pick up the win.

After the match, Judgment Day came to the ring to tell Stykes they’d warned him he was outnumbered. I have offered Styles another opportunity to rise up and join the group. Styles, surrounded by the rest of the group, gave Finn Balor the finger. The faction beat him down and threatened to stomp on a chair with Styles’ throat inside. Balor warned “I could have ended your career, but that’s not what friends do.”

See also  My Hero Academia: What is the mount? Lady's Hero Ranking and 9 more questions about her, answered

Judgment Day continues to take aim at multiple people on the Raw roster. It’s unclear what their strategy is, but they’re doing some serious damage.

While it’s a speedy return from an apparent broken leg, Edge made his return to WWE in the closing match of the night. Riddle was outnumbered after getting a roll0-up victory over Damian Priest in the main event. Edge came down and cleared the ring, then challenged Finn Balor to an “I Quit” match at Extreme Rules. This was a great moment for the Canadian audience as Edge received a huge pop making his comeback in Canada. He shouted out to the crowd saying he was glad to be back and never quits. That’s why an “I Quit” match makes the most sense.

Judgment Day has made some enemies in recent weeks between Riddle and AJ Styles. One has to wonder if Edge will have some assistance in the weeks leading up to the event.