Américo Villarreal is eligible to be governor of Tamaulipas: Electoral Court project 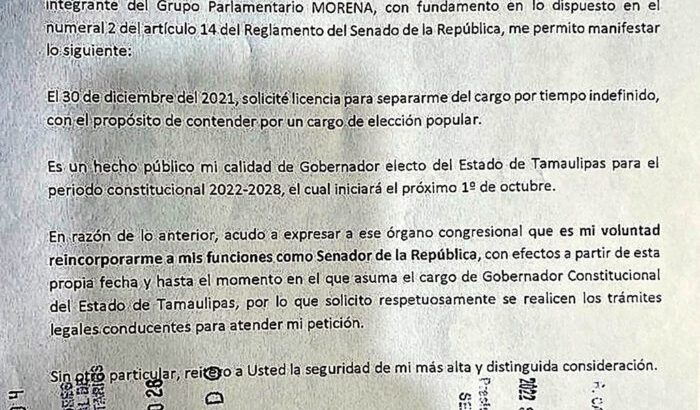 Judge José Luis Vargas Valdez will propose to the Superior Chamber of the Electoral Court of the Judicial Power of the Federation (TEPJF) declare unfounded the demand of the National Action Party (PAN) to declare Morena’s candidate, Américo Villarreal Anaya, ineligible, to hold the position of Governor of Tamaulipas.

In a new draft sentence that adds a study on this subject to the proposal that he made public last Monday, Judge Vargas responded to the supervening evidence presented by the PAN related to the election for governor of Tamaulipas, among them, Villarreal Anaya’s request to rejoin the Senate of the Republic from September 26 to 30in order to avoid the fulfillment of an arrest warrant against him before his taking of protest.

In the proposed resolution, the magistrate points out that the restrictions provided for in the Federal Constitution and in the Constitution of Tamaulipas, which force public servants and acting legislators to leave their positions or seats 120 before election day, have as purpose prevent officials, deputies and senators, among others, from benefiting from the use of public resources before election day.

In this sense, he said that the electoral court has issued various rulings that have to extend the constitutional right to be voted and not to restrict it, for which a definitive separation from office is not required, but only during the development of the electoral contest.

The restriction, adds the argument, is maintained until the district and state calculations of the election are carried out, as well as for the resolution of the challenges that have been presented for the review of said calculation and the annulment of polling places and votes that are the product of some irregularity.

Judge Vargas added that in the case of the election for Governor of Tamaulipas, all these terms had already been left behind, therefore, the reinstatement of Américo Villarreal to the Senate did not violate the constitutional restriction nor does it put the fairness of the electoral process at risk, to the extent that as a senator of the Republic, Morena’s candidate for governor of Tamaulipas cannot exert any type of pressure against the electoral court to influence the qualification of the electoral process. scheduled to be debated this afternoon in the Superior Chamber of the TEPJF.

The sentence proposal also adds that in its last-minute challenge presented by the PAN as supervening evidence, no element of evidence is provided from which it can be deduced, not even in an indicative way, that the reinstatement of Américo Villarreal to the Senate of the Republic on September 26 and the request to withdraw from office a few hours later, is equivalent to an improper use of the position of senator with the purpose of influencing the electoral magistrates to define their vote in this afternoon’s debate.

For all of the above, the new sentence draft of Judge José Luis Vargas reaffirms the victory of Américo Villarreal Anaya as a candidate for Governor of Tamaulipas, definitively dismisses the challenge of the PAN and rules out any link between the Moreno flag-bearer and organized crime groups.