Review of ‘The Return of the Witches 2’ 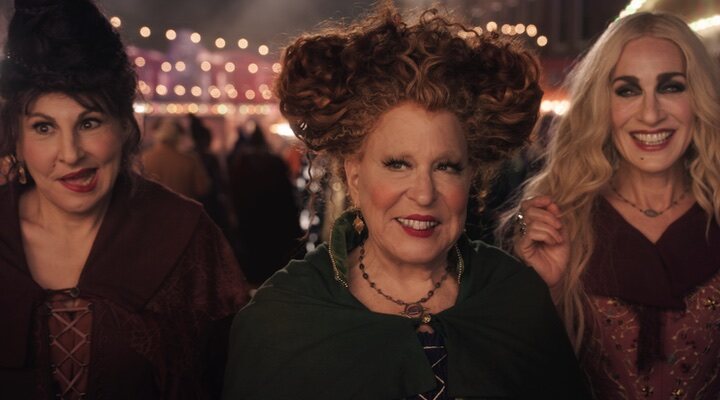 Almost 30 years after the premiere of ‘The Return of the Witches’, someone at disney found an extra black flame candle to summon the sanderson sisters again. The thing about Kenny Ortega’s film (‘High School Musical’) is the spell of nostalgia in its purest form. The film did not do well at the box office in 1993, nor did it do well with critics. However, a few (quite a few) years later, people began to ask very insistently for Bette Midler, Kathy Najimy and Sarah Jessica Parker to get back on the broom (or vacuum cleaner) and bring back that little terror for the whole family that turned with the passage of time to ‘The Return of the Witches’ in a cult classic, perfect for the time of Halloween. Finally the prayers of the fans in the light of the full moon have been heard and on September 30 lands on Disney + ‘The return of the witches 2’.

Every time one of the stars of the first installment has been asked what it would take for them to come back, the answer was always the same: “there has to be a good story to justify it.” David Kirschner, screenwriter of the original, Blake Harris and Jen D’Angelo have gone to great lengths to write a film that pays homage to the original, and above all has that same innocent yet playful “introduction to horror” feel that makes from the first something so entertaining. Although repeating the formula is difficult, ‘The Return of the Witches 2’ meets enough basic points to achieve its purpose, even if it cannot reach the first appearance of the Sanderson sisters.

The bulk of the action takes place in the present. Becca (Whitney Peak), Izzy (Belissa Escobedo), and Cassie (Lilia Buckingham) are three witch lovers who celebrate each Becca’s birthday, which falls on Halloween, by casting a spell in the woods near Salem to ask for power for the new witch. year. But on her 16th birthday several things go wrong. First, Cassie is not there because she has distanced herself from them since she has married one of the athletes (Froy Gutierrez). And second, they inadvertently resurrect the Sanderson sisters by relighting a black-flame candle. The witches return wanting revenge, and this time they intend not to failcoming to consider performing the forbidden spell from Winifred’s book. 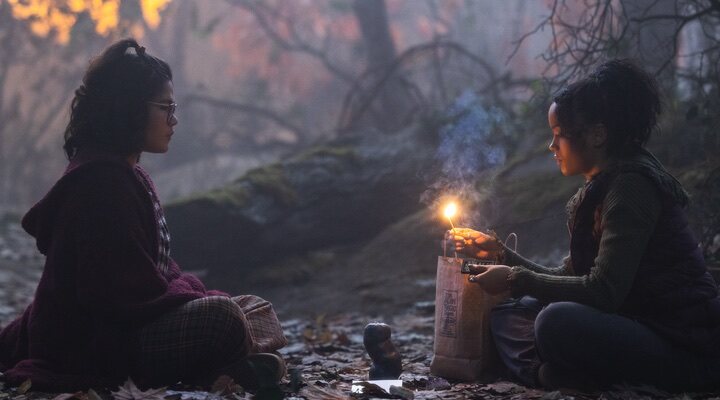 ‘The Return of the Witches 2’ achieves that familiar tone that Disney manages so well and that is the secret of the success of these films. It has enough of a childish point so that the little ones can watch it without ending up terrified, and at the same time it has a mixture of nods to the original and more current “parent jokes” so that the adults also have a good time. The sequel does not have that “horny” point of the first, which repeated the word virgin more or less every three sentences, but makes up for it by taking advantage of the fact that the Sandersons are women from another time to confront them with the Roombas and Alexas of the century XXI. The scene in the supermarket looking for rejuvenating creams (made with real children!) is hilarious.

See also  Half of life on the planet, at "high risk" due to the climate crisis

Fortunately, the three Sandersons have returned with a lot of desire to have fun. Otherwise, this movie would make no sense. Kathy Najimy maintains a command of stupendous physical humor. Bette Midler is once again a wonderful leader, channeling Winifred as if no time had passed. But it is Sarah Jessica Parker who has come wanting to give absolutely everything. Not only does she bring back that volatility and “borderline” point of Sarah Sanderson that already made her hilarious in the first, but now, with that star and icon status behind her, she is willing to show us that she is twice as daring with whatever they throw at him, whether it’s doing the split or stealing a musical scene from Bette Midler. All three remember the mannerisms as if it hadn’t been 30 years, and their chemistry remains intact, throwing each phrase as if it were pure improvisation. They were the reason for ‘The Return of the Witches’, and they continue to be the reason for the second part. It’s magical (sorry) to look at the faces of the three and realize that they are making great efforts not to burst out laughing. They spend it like little girls, and thanks to that we end up the same. 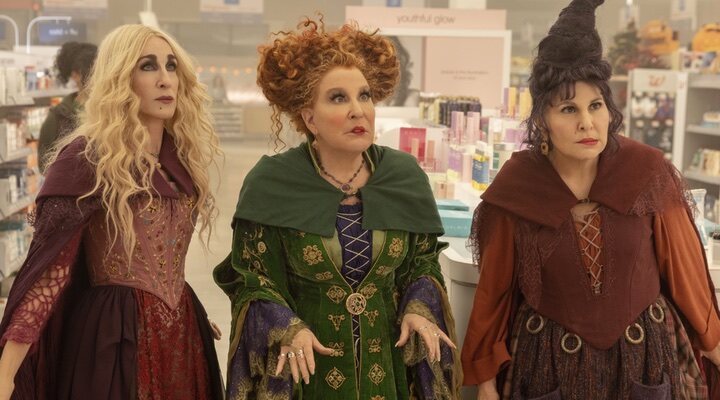 Such overflowing and effervescent energy is much needed because the new leads aren’t able to carry the weight of the film as well as the lovely Thora Birch (Dani), Omri Katz (Max) and Vinessa Shaw (Allison), the children of the first. Becca, Izzy and Cassie are quite simple characters and do not have an excessive evolution. Froy Gutiérrez almost ends up leaving more of a mark as an unexpected scream king in one scene than the three of them in the entire film. Despite the fact that the film has been able to update itself quite a bit without losing sight of its origin, the choice of three teenagers in a children’s film seems more like an attempt to appeal to an audience that was very likely going to ignore the film in any case, no matter how interesting that could become his inclination to witchcraft, spells and crystals so as not to repeat the path of the first. In fact, I wish they had explored a bit more a possible tilt towards witchy fervor that is so fashionable, how Winifred would freak out seeing groups of teenagers casting spells in the park. But deep down we don’t want the Sandersons as allies, but as the revenge-hungry villains they deserve to be.

Let’s go back to the real queens. Anne Fletcher’s film (‘The Proposal’) has sought to differentiate itself from the first by giving it an emotionality that the original did not have. A prologue shows us some young sisters getting their powers, and leaves us with a Hannah Waddingham who would see a spin-off and a wild Tony Hale who will continue in his appearances in the film trying to emulate the coven in overacting. If the first was a Halloween story, simple as well as effective, it aims to invoke the strength of friendship, brotherhood and the bonds that hide our true power. Especially between Winifred and her sisters, whom she often considers a toothache, but they are her toothache. ‘The return of the witches 2’ manages to touch the heart as well as make us laugh, albeit in quite tricky ways. I greatly appreciate the attempts to make it different from the first, but I am even more grateful that time has allowed them to distinguish what worked in ‘The Return of the Witches’ and not lose it over three decades, like giving us Bette Midler singing a great version of Elton John’s ‘The B… The Witch is Back’, bringing back a fantastic Doug Jones as Billy Butcherson, the good (and now talkative) zombie who finally do justice, and take advantage of advances in technology so that the spellbook can demonstrate a greater interpretive range. The visual effects are correct, most likely the result of the film going directly to streaming, although I want to believe that it is also a way of paying homage to those more homely effects of the first (despite the fact that the cat version of Thackery Binx was top CGI at the time). 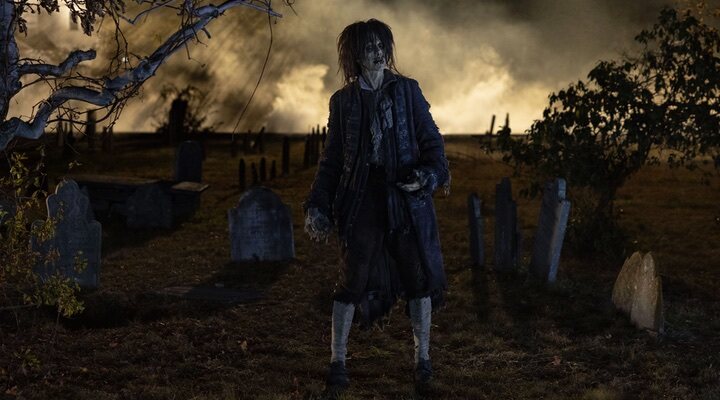 We won’t get to see ‘The Return of the Witches 2’ on the big screen, but his return doesn’t feel like a minor product. It’s a full-fledged sequel that accomplishes two seemingly difficult things: convincing Bette Midler, Kathy Najimy, and Sarah Jessica Parker to return as Winifred, Mary, and Sarah (with all of the law), and reencapsulating the spirit silly of the original without being too sweetened for the cynical times that run. The Sandersons once again give us a perfect movie to enjoy with lots of popcorn, candy and chocolate on Halloween or any night we feel like conjuring up an effective getaway for the whole family.

‘The Return of the Witches 2’ premieres on Disney+ on September 30.

The best: Lo for the work that Bette Midler, Kathy Najimy and (especially) Sarah Jessica Parker have returned to have fun, and have fun. The nods to the original mixed with a more current humor.

Worst: The three teenage leads are pretty forgettable. He drops interesting ideas to explore other facets, like witchcraft fashion, but they come to nothing.