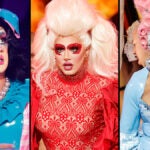 Carson Kressley had a special connection to one of the stars who took part in Season 2 of “RuPaul’s Secret Celebrity Drag Race” – they were co-stars on the original installation of “Queer Eye (for the Straight Guy”).

Thom Filicia turned up on the show earlier in the season, taking on the drag persona Jackie Would. As Kressley settled in as judge for the VH1 show, it took a minute for him to recognize that his co-star from “Queer Eye,” also his co-host on “Get a Room with Carson & Thom,” and a longtime close friend was the queen onstage. Of course, he’d left his glasses backstage.

“We filmed it on a new stage. It just felt very, very different from the regular ‘Drag Race,” Kressley told TheWrap when we spoke with him Friday ahead of the show’s Season 2 finale on VH1. “I was out of my element and out of sorts a little bit. I didn’t have my glasses that day, which I can see, but I can’t see like, real detail. … So I’m just watching the performance and I think it was, blame it on my ‘Juice,’ which I know is one of his favorite songs by him – we’re very close. And I saw the person doing the thing, and I was like, ‘She’s interesting.’ And then when it was time for the contestant to speak, I was like, ‘Oh my gosh, I know that Syracuse, New York Finger Lakes-region accent. That is Tom Filicia.’ And I was as the kids say, I was gooped and I was gagged that I didn’t recognize him sooner. But I just wasn’t expecting him to be there. Like, of all the 500 billion people in the world. I didn’t think Thom Filicia would be there. Nor did I think he’d be able to keep it a secret as well as he did. So I had absolutely no inkling that it was him.”

Filicia sadly was cut several weeks before the finale, but Kressley said his friend went away having “loved the experience.” Kressley found Filicia’s exit shocking. Another pre-finale exit – Chic-Li-Fay (aka “Glee’s” Kevin McHale), who was cut just last Friday night, was also a surprise.

“Yeah, I was shocked about that one. Chic-Li-Fay was so fantastic. Throughout the season, I thought [Chic] would be there ’til the very, very end,” Kressley said. “By like, Episode 3, I was just like, OK, this is [Poppy Love], Chic-Li-Fay, Thirsty Von Trapp – these are like the three people. So yeah, that was a shocking one.

“But then we wound up with three amazing contenders at the end who all bring very, very different energies and different ways of doing drag in very personal ways,” Kressley said of Aj McLean’s Poppy Love, Mark Indelicato’s Thirsty Von Trapp, and Tatyana Ali’s Chakra 7. “And I think it’s going to be a great finale tonight, because they’re all so different.”

Watch TheWrap’s full conversation with Kressley in the video above.