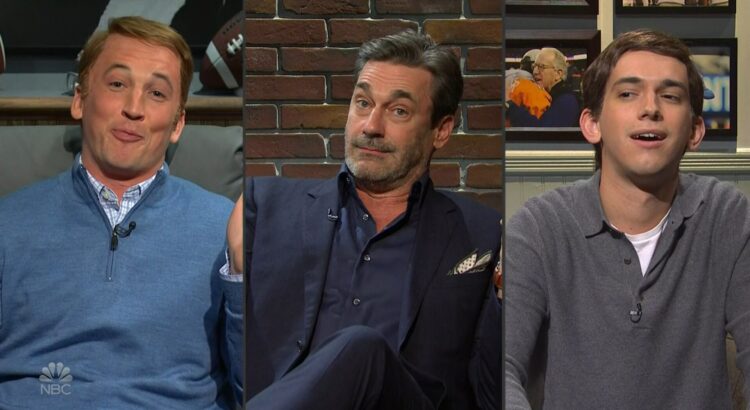 “Saturday Night Live” started Season 48 on an extremely meta note, with a cold open sketch that roasted the recent cast turnover, and did some pretty funny mockery of the show’s frustrating reliance on lazy Trump-centered political parodies.

The bit, which basically acknowledged almost all criticism of the show as well as the commentary about the show’s health following the recent big cast exodus, featured first-time host Miles Teller as a surprisingly spot-on Peyton Manning.

Watch the clip below:

Hosting an ESPN show alongside Andrew Dismukes as Eli Manning, they ditched sports to instead drop in on a bad “SNL” cold open sketch and rate the quality.

That sketch turned out to be yet another of the weak Trump sketches “SNL” has relied way too much on recently. Except instead of playing it straight, the Mannings — eventually joined by three-time host Jon Hamm playing himself — focused on how bad it and the various cast members were.

“I don’t know” what it is, Hamm joked at one point, “But it’s not comedy. And they haven’t even used Kenan yet. That’s like having a whole team of Peytons and using Eli. No offense Eli.”

But the sketch didn’t just roast weaker Trump stuff. It also mocked how often “SNL” has basically just done parodies or references to whatever the meme of the week was, this time having new cast member Devon Walker as the corn cob kid.

Hamm joked that the moment was “like when a sports team tanks to get a better draft pick next year.”

As it went on, snowboarder Shaun White showed up in a parody of the frequent “SNL” stunt casting of late, at which point Hamm joked that it happens whenever the current host isn’t a big enough star. To which Teller’s Manning noted “they rarely put the host in cold opens, so when they do it, it is special.”

Eventually Teller declared, “thank god they got Kendrick Lamar as the musical guest, because that’s the only reason anyone is tuning in.”