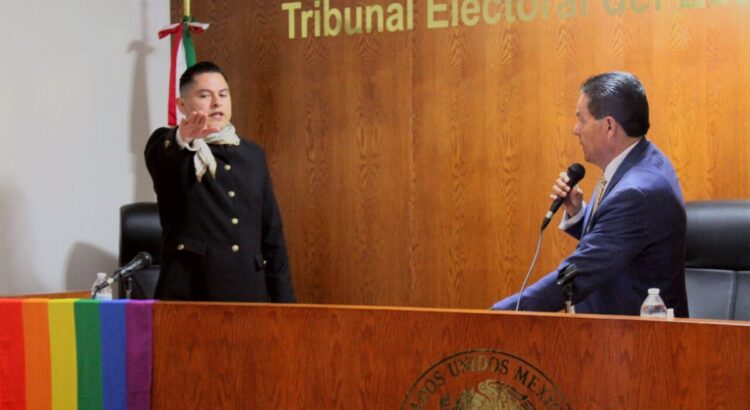 to the event attended by federal and local authorities from the three levels of governmentas well as representatives of various groups in situations of vulnerability, for example, indigenous people, people with disabilities and people from the LGBTIQA+ population.

In 2017, Jesús Ociel Baena Saucedo was a member secretary in the Executive District Board of the National Electoral Institute (INE) in Guanajuato. Six years earlier, he held a similar position, but in the state of Aguascalientes.

The magistrate obtained a doctorate in Law from the Autonomous University of Durango and He has taught at various universities in Aguascalientes.

The Council to Prevent and Eliminate Discrimination of Mexico City (COPRED) uses the term “non-binary” (NB) to describe “a person whose gender identity does not fit the traditional two-category structure.” Non-binary people identify with a gender position different from the male or female categories, regardless of their physiognomy.

Some people NB they do not identify with any particular gender; sometimes they disagree with the idea of ​​“gender” and question biology and the male-female binary system, explains this institution.

Therefore, the use of inclusive language is one of the demands of non-binary people, because it breaks with the dichotomy of only feminine and masculine pronouns.

“Inclusive and non-binary language is a way to equalize. It does not pretend to be correct, but to challenge reality and transform it. Beyond rules, it is about building a different world, in which all people are visible and respected equally,” said the Minister President of the Supreme Court of Justice of the Nation, Arturo Zaldívar, in a video.

Inclusive and non-binary language is a way to equalize. It does not pretend to be correct, but to challenge reality and transform it. Beyond rules, it is about building a different world, in which all people are equally visible and respected. pic.twitter.com/fA8llHrJ2C

According to the 2018 Survey on Discrimination based on Sexual Orientation and Gender Identity (ENDOSIG), 80.2 percent of people with a non-normative gender identity perceived being discriminated against for at least one reason, among which are the physical appearance (59.3 percent), the way they dress (49.5 percent) and the way they speak (42.6 percent).

(With information from Brandon Celaya)